The Hubsan X4 Cam Plus was supposed to be the perfect aircraft, and the manufacturers worked hard to create something new and amazing. Unfortunately, poor design choices along the way ruined the entire experience.

It’s sad, because the original Hubsan X4 was a revolution – it was the first true palm-sized quad rotor and it was a sensation in the R/C world. Every time Hubsan released a new version of the X4 it was a real improvement. First they upgraded the flight software and added lights, then they added a camera, and eventually they came out with a first person view version. Each new version flew a little better and had new features that made a real difference.

The one thing that hasn’t changed is the amazing camera. Hubsan uses wide angle lenses on their cameras and it makes a big difference. I’ve flown a lot of camera drones and no one does cameras like Hubsan. They have crisp, clean HD video and a wide field of view that no one else can match.

I didn’t have any range issues with the transmitter, but I don’t like that it uses AAA batteries, because they just don’t last long enough.

This is a nice looking aircraft. It’s been completely redesigned from the ground up to look like a professional camera drone, so the old Hubsan look is gone in favor of an even sleeker appearance. It’s made from thick, nicely sculpted plastic and the curves and lines are all very well thought out. They put a lot of work into the aircraft design and it really shows.

This aircraft is made from high impact plastic and it’s very durable, which means it can handle being crashed without a scratch. Unfortunately, the newly designed battery sometimes falls out when the aircraft does crash. It doesn’t lock in place very well and if it falls out while you’re filming, none of the video you’ve filmed is saved. I prefer the original battery system.

Everything comes completely ready to fly – just charge the aircraft and put 4 AAA batteries in the transmitter.

The manual is very well written and contains a lot of vital information, but it does have a few inaccuracies. For example, it says that the headless mode and the high speed mode are controlled by the same button which is not the case.

The first time I flew this aircraft I was indoors, and it wasn’t as much fun as flying a traditional Hubsan X4. The Hubsan Cam Plus has a new altitude hold feature that takes some getting used to. It uses a barometer to measure air pressure; as the aircraft flies higher the air pressure changes and this information is used to determine altitude.

When I was flying indoors the altitude hold system was the enemy, as the aircraft would often want to keep flying up and I had to fight it to keep it from hitting the ceiling. I found the original Hubsan X4 to be much better indoors. The altitude hold system worked a little better when I took the aircraft outside, but its speed was just too slow. It couldn’t go above the tree tops without getting caught in the wind. Every time I would fly above the trees the wind would start to push the aircraft away and it just wasn’t fast enough to fight it. I found myself holding down the throttle all the way, trying to get the aircraft to quickly come back down before it got lost.

The problem is that Hubsan programmed the aircraft to shut down if the throttle stick is held down for more than a few seconds, and this will cause it to fall out of the sky.

The problem is that when you are really high up and the wind starts to push your aircraft away, you want to bring it down quickly before it gets lost. The aircraft descends very slowly and sometimes it can take 10 or 15 seconds for it to descend from a hundred feet. But if you hold the throttle stick all the way down for five seconds or more, the rotors stop spinning. It happens to me almost every time I fly above 50 feet. The aircraft just isn’t fast enough to fight the wind, so I try to lower the aircraft before it gets lost, but the rotors stop spinning and the aircraft falls out of the sky. When the aircraft hits the ground the battery almost always disconnects and the video never finalizes. It’s a major design flaw that makes the aircraft unusable above 50 feet.

I would love to be able to turn the altitude hold system on and off but unfortunately this isn’t possible.

Indoors I found myself constantly fighting the altitude hold system and outdoors I couldn’t go above 50 feet without worrying about losing the aircraft. In the backyard it worked fine and was smooth and easy to fly, but overall its performance was lacking.

The aircraft only has two flight modes – slow and medium. I don’t know why they didn’t add a third high-speed mode, as it would have fixed a lot of problems.

Hubsan used to have a very specific method for controlling how your aircraft flipped – it was a little more complex but it gave a lot of freedom. The new flip system, however, is just a standard push button flip.

This version is good for getting a little backyard video with a nice camera, but it’s not a racer or a cinematographer’s aircraft.

The provided transmitter looks almost identical to other Hubsan transmitters except it has the throttle stick centered instead of at the lowest position. It only works with the Hubsan Cam Plus and isn’t backwards compatible.

One of the biggest letdowns has to be the new battery. Hubsan did away with the standard battery and connector in favor of a new modular smart battery system – and it is awful. You use a standard USB cable to recharge the battery but you have to connect the cable to the aircraft while the battery is installed in the aircraft. The aircraft is the charger; there is no standalone charger, so you can’t charge one battery while flying another. The flight time of seven minutes is very short and the charge time is unforgivable at over 70 minutes. The original Hubsan X4 used a very standard low-cost, easy-to-replace 3.7 volt battery and it was a great system. This new smart battery system is just awful in comparison.

I love the camera, I absolutely do. Nobody does cameras like Hubsan. They use high-quality wide angle lenses that make the video look amazing. I’ve tested countless aircraft and Hubsan is at the top when it comes to cameras. 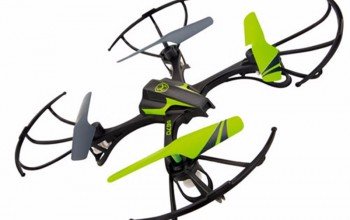 Introduction I never click on banner ads. But when I saw an ad for the Sky Viper 670 Stunt Drone, I was intrigued. I went to the web site of the manufacturer  a...

I understand the new design choices. Hubsan was trying to make a palm-sized quad rotor that acted more like a large professional drone, but in doing so they lost sight of what a palm-sized quad rotor is all about - freedom. The original Hubsan X4 gave you true freedom, as you could fly it indoors in any environment no matter how small, and outdoors it could fight heavy wind and get some amazing video. It was a true all-around aircraft. The new Hubsan Cam Plus just can’t compare to the original, so I’ll take a traditional Hubsan X4C any day of the week.
5