The H-29 is a great little aircraft from JJRC. It’s very affordable, it’s got a lot of power, and it’s very responsive and easy to control – plus it’s fast! However, there are four different versions, ranging from 35 to 75 bucks, so picking the right one makes a big difference.

If you’re in the market for a low cost quad rotor then you should check out some of the new aircraft from JJRC. They’re a relatively new company, and although they aren’t the biggest or most innovative company in the world, they do make some good little aircraft.

The most unique thing about this aircraft is the way it flies. It’s fast and stable, able to turn on a dime, and it’s smooth, easy to control and a lot of fun to fly. However, the H-29-W uses a standard WIFI camera that can be described in one word – lackluster.

WIFI cameras have quickly become the cheap alternative to the more costly 5.8 GHz video systems. The standard JJRC H-29 without a camera only costs about 35 bucks, the WIFI version sells for about 55 bucks, and the 5.8 GHz version costs about 75 bucks. That means the 5.8 GHz video system costs 40 dollars, which is 10 dollars more than the aircraft itself. So the WIFI camera only adds 20 dollars to the price tag. That’s enough to convince most people to buy the cheaper WIFI version, but it’ll come at a price, and that price is video quality and reliability.

The difference in range and quality of the two video systems is like night and day. The WIFI works, but it just isn’t reliable, as the video stream randomly drops out. The video image will suddenly freeze for a few seconds, and during that time nothing is recorded, so you end up with very choppy video. It makes FPV flight impossible, and the video that you get isn’t very good. I’ve tested a few different WIFI systems and they all have the same problem – choppy video. A WIFI video system also means that you need to have a smartphone or tablet to be able to view the video stream.

The H-29-G, on the other hand, comes with a video monitor built into the transmitter, and it uses a 5.8 GHz camera, which means a more reliable video stream. Unfortunately, it seems to record the video with the transmitter instead of with the camera, so any static that occurs will show up in the final video. The up side, though, is a more reliable video stream and the ability to fly FPV. And when it comes to FPV flight, I think this aircraft is a candidate, as it handles itself really well in the air

This is a nice looking aircraft. The word warship is printed on the side – I don’t know what exactly makes it a warship, but it does look like a little spaceship. It’s nicely painted with multiple colors that fade into each other and the plastic body has an original design. Someone put some thought into it and tried to make it look good.

Made from very lightweight plastic and reasonably durable, it’s not as sturdy as other quads I’ve tested, but it should handle a few crashes without a problem.

It features 4¾-inch propellers that are hard to break and easy to replace, however if you need to replace a motor you’ll have to take apart the entire aircraft. The camera isn’t very solid and the means of attaching it to the aircraft is a little shaky. It’s a very minimalist system, and while the video didn’t have any vibration, it was just low res and choppy.

The packaging is the same for all of the different versions of this aircraft. On one side of the box is a picture of the 5.8 GHz version and on the other side is a picture of the WIFI version. It’s a good way for the manufacturer to save money, but I’m sure it’ll confuse at least one person into buying the wrong version.

An instruction manual is supposed to be included but I couldn’t find it. I may have dropped it somewhere when I opened the package, or maybe they forgot to put it in. Nonetheless I was able to figure everything out pretty quickly, and the box has a QR code to help you download the app to view the video stream.

This aircraft is fun to fly. It has three different flight speeds and each one is well programmed. Low speed is smooth and great for practicing indoors, and the high speed mode is amazing and great for advanced pilots. When I was flying outside I had absolutely no trouble maneuvering through obstacles at high speed and doing quick, sharp turns. It responds instantly and I love the way it turns. It has a great deal of authority during a turn, listens to the pilot and doesn’t fight back or over compensate. I was impressed, as usually this class of aircraft is lacking in some department. Often they are slow or unstable during hard fast turns so you can’t really push them to the limit.

The H-29 was able to handle everything I threw at it.

With a better camera this aircraft would get some pretty decent video, as it has a great range and is very smooth high up in the air. Unfortunately, the WIFI video range is only about as far as the WIFI in your house, maybe a little less. The 5.8 GHz version will have much better video range.

If you’re a newcomer to the hobby and you’re looking for an affordable all around aircraft, then this is a good choice, but if you need to get high quality video then you’ll want to invest in a better camera. This aircraft is fun and easy to fly and it has potential as a video platform. Unfortunately, its low cost video system is a little disappointing.

The preprogrammed one button flip is quick and easy to do, and the headless mode works great, but you definitely need to try it at the beginning of the flight with a freshly calibrated gyro. The gyro is easy to calibrate – just place the aircraft on a level surface and hold the transmitter sticks down in the lower corners for a few seconds until the lights flash. It’s a very standard procedure with quad rotors.

The provided transmitter has a nice layout, is comfortable and only needs 3 AA batteries. The phone holder is simple and works with most phones. It clips onto the top of the transmitter but it won’t hold a tablet or a phone larger than 3¾ inches wide.

You won’t be able to see any telemetry like voltage or flight time on your phone, just a video stream, but it’s an easy app to use. It seems to be an open source WIFI video application. A very similar application was used by Cheerson to control the CX-10-W.

Although the camera was easy to use, it left a lot to be desired, as the resolution was not HD and the video was choppy. The WIFI video range was also pretty poor, and the lack of a micro SD card to record the video stream is a big letdown. The only videos you get are the ones you record on your phone. 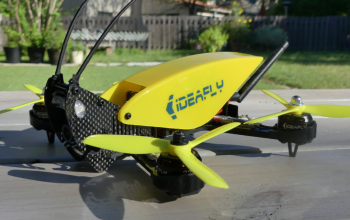 Introduction Ideafly Grasshopper F210 may look like a toy, but be warned, it is not a toy! With a design that looks like a flying insect, the Grasshopper drone ...

I really enjoyed flying this aircraft. It was easy to race through obstacles at high speeds, and it does a really good job at high altitudes. If it just had a better camera system it would be an amazing aircraft.
6