At seven inches diagonally, the HAK 905 Drone is a unique size that fits right between the tiny drones like the Syma X12S Nano and the larger indoor/outdoor size drones like the Syma X5C.  This drone has many features common to toy drones in its class…things like flips, different flight settings, and interchangeable batteries.

What really sets this drone apart from the rest though is the four propeller guards that are integrated with the body and filled with bright LED lights. I currently own way too many small toy drones and had sworn off purchasing any more. But when I saw the pictures of this one with its bright LEDs and cool body style, I just had to give it a try. And after a week and several flights, I’m really glad that I decided to get it!

As I mentioned above, this drone is a unique size…bigger than most nanos, but not as large as the next size up. I would still categorize it as an “indoor flyer”, but I have confidence that on a calm day with no wind, it could easily fly outside. It has the standard cheap plastic remote that typically comes with these “toy” class drones and the configuration of the controls is standard as well. Left stick is throttle and yaw, right stick is direction, top left button for switching between three flight modes (beginner, advanced, expert) and top right button for performing flips.

What truly differentiates this quadcopter is the body style. It is very futuristic looking with a translucent white body and smooth, solid ducts that completely surround the propellers. Typically I am not a big fan of propeller guards. Most of the time they are bulky and tend to significantly impair the quadcopter’s aerodynamics. But in the case of the HAK 905, the prop guards are very sleek and give this drone a solid, almost indestructible feeling. In my first flight, I got disoriented and immediately flew into a wall in my house, but instead of crashing to the ground, I was able to bounce off the wall, correct my orientation, and continue flying. I know that prop guards are nothing new, but I have never seen them work as well as they do on this drone!

The coolest feature of this drone, by far, is the bright integrated LEDs that glow from within the translucent body. Because they are behind the semi-transparent frame, these lights appear to glow from within. This gives the entire airframe a very futuristic UFO look and makes it very easy to orient in the dark. With these bright LEDs, I actually prefer flying this drone in dark conditions. It’s great for indoors or outdoors (if there is no wind) at night. And the three flight ranges make it good for beginner to expert pilot.

For $55 USD, this drone is right in the mid range in terms of price. And while the remote control is very cheap feeling with fake silver buttons, the actual frame and build of the drone seems pretty well made. It has a very solid and somewhat heavy body that feels like it can take some punishment if you happen to crash. In my first couple of flights I managed to crash it several times without any damage.

The way that the LEDs are integrated into the body is also very nice and unique. They are protected by the frame and give it a very clean and modern look. The only thing on the actual quadcopter that feels a little cheap is the battery door, which feels flimsy and tends to pop open when you crash too hard.  I would recommend possibly putting a small piece of Velcro on the battery door to help secure it during rough flights.

The HAK 905 comes in a very nice plastic shell within the cardboard box. Once you cut the tape holding the shell in place, it splits in half and reveals the quadcopter and remote. The shell is of decent quality and I would recommend keeping to for transporting or storing the drone when you are not flying it. The first thing to do is open the battery compartment on the bottom of the drone and take out the battery for charging.One really nice thing about this drone is that it uses the same size 3.7V batteries that the Syma X5C uses! I own about 20 of these batteries and quite a few USB chargers, so I was really happy about this discovery. I was also hoping that the drone would bind with a Syma radio, but despite multiple attempts, I could not get it to bind with the Syma radio, so I ended up using the radio that came with it.

The binding process is not explained in the instructions, but it’s basically the same as the Syma quadcopters. Turn on the quadcopter and place it on a level surface so that the gyros can calibrate. The lights will blink quickly and then slow down. Turn on the remote and once the lights on the drone have changed to the slow blink, raise the throttle stick from 0 to 100% and then back down to 0 again. At this point, the lights on the drone will stop blinking and you will be ready to fly!

Even though I think the body and styling of the HAK 905 is very cool, I have to say that there is one thing about it that is very confusing. For the first few flights, I thought the front was the back and the back was the front. The actual front has a notch cut out of it and the back is smooth and rounded, which to me, seems backwards. However, once you know which way it should be oriented, it is a pleasure to fly.

One other thing to keep in mind is that the default flight mode (beginner) is not very responsive at all. I understand why they make it this way, so that beginners can easily control it, but in this beginner mode, it sits so flat that it is hard to get it moving, and once you do, it is hard to change direction! My recommendation is to immediately push the top left button until you hear two beeps and begin flying in “advanced” flight mode. To me this mode feels much more responsive but is still pretty easy to control. The “expert” flight mode is not nearly as aggressive as I would expect, but at least they give you three modes to choose from. But the default beginner mode is really pretty useless for anything other than hovering, so avoid it if you can.

This drone does crisp flips. You simply push the right stick the direction you want to go and then hit the upper right button to complete the flip. If you flip and then give it full throttle, you can avoid losing any altitude and do flips fairly close to the ground.  You can also do multiple flips in a row by pushing the button repeatedly. 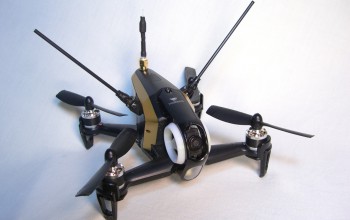 I was recently stricken with an incurable condition known as FPV racing fever, and now that the fever has spread to my brain the only thing I can do is treat th...

This is a unique and cool little drone. It is nice that it falls into a in-between size (not too big, not too small) and the integrated LED lights are really impressive. I am not usually a fan of prop guards, but I really like the prop guards on this one! They are very good at keeping the drone from crashing and they seem to be well integrated within the body of the drone. The combination of the prop guards and bright LEDs make it a really fun indoor flyer. I think that it would be a good addition to your collection and the go-to flyer for flying indoors at night!
7