If you’re short on both money and space, then you might be tempted by a low-cost folding racer. However, there are a few things to consider before you do.

The Parkour 280 folding racer comes from a brand new player in the R/C world—ROA Hobby. This is the company’s first racer and, as far as I can tell, its fourth R/C aircraft. They’ve also produced a helicopter and a small hexacopter, so this will be ROA Hobby’s first brushless quad rotor. What they’ve managed to put together in this package for a little over two hundred bucks is pretty impressive.

The most notable feature of the Parkour 280 is that it folds up and fits inside the included carrying case, along with the transmitter. This feature alone makes it worth a look, and it’s actually pretty simple. The rotor arms are on hinges and you just pivot them in or out. They click into place and are held by plastic clamps.

The plastic clamps bend pretty far every time you open or close the arms, so at some point the clamps are going to break. One of my clamps already has a crack in it so eventually it will need to be replaced. It’s not a deal breaker and the plastic they used is very sturdy—it’s just something that’s worth noting.

The camera has a few nice features that are also worth mentioning. First, it is contained in a plastic housing that really helps protect the camera from impacts. They’ve also designed a handy stabilization platform to hold the camera in front of the aircraft and keep it from vibrating. It has a ball joint mount that allows you to easily adjust the camera angle, giving you excellent range with little to no interference. This is just a basic 700 TVL camera with a wide angle lens. It doesn’t record the video—it just broadcasts it in real time over the 5.8 GHz spectrum—but it’s really easy to remove the stock camera and replace it with a Go-Pro or similar camera if you want to record your flight.

ROA Hobby is definitely proud of their folding racer because the company’s logo is all over the aircraft. It’s on the motors, the canopy, the camera housing; it’s even been cut into the carbon fiber panels that run along the side of the aircraft. The canopy gives it an aerodynamic edge, but honestly the aircraft looks sort of long and strange with it on. Without the canopy it looks like a piece of high-tech flying machinery, but it doesn’t really have any beautiful lines or curves that stand out. However, when you pull it out of a small briefcase and unfold it before a flight, you always get a sense of excitement. It’s also very nice to see the aircraft folded up next to the transmitter and charger, packed safely in the protective foam-padded carrying case

The carbon fiber body features rotor arms that are formed from metal tubes, and the motor mounts, arm clamps, and camera housing are made of plastic. All the plastic parts are white and all the carbon fiber parts are black, so even without the plastic canopy the aircraft has a decent look.

Everything seems very durable—the CF body is strong and rigid, the injection-molded plastic parts are very stiff but flexible, and the metal rotor arms are very sturdy. Another really nice feature is that, because they fold up, the rotor arms can actually absorb some of the force of an impact during a crash. This really helps protect the rotors and the motors during a crash and also helps protect the rotor arms themselves. The only part that isn’t very durable is the plastic canopy—it came off during the first flight and the rotors cut a small piece out of it. It also came off during the second flight and lost two of the rubber grommets that had held it in place, so now I either leave the canopy off, or make sure to strap it on good and tight with a piece of tape or some rubber bands

This aircraft came ready to fly, only needing 4 AA batteries in the transmitter. The box that it came in also doubles as a foam-padded carrying case. So when it arrived it was just a briefcase inside a small shipping box. I unzipped the briefcase, pulled out the aircraft and unfolded it in a few seconds, and once I had charged the battery it was ready to fly.

I did need to provide my own monitor to view the video signal though. I used a very generic standard video monitor and had no trouble finding the video signal, so your Fat Shark glasses or other FPV monitor should work just fine.

As far as I’m concerned everything is nicely programmed, but there is a very easy-to-access USB port on the side to reprogram the aircraft should you want or need to.

At the moment the manual is pretty brief, consisting of only about four pages. It tells you how to start and stop the motors, contains an exploded diagram and a parts list, and it tells you how to replace the camera. It’s a very new aircraft so hopefully they will add more information over time

The aircraft felt good in the air, it has the power it needs, and it doesn’t feel over- or under-powered. It turns really quickly and reliably, much better than I was expecting, so you can do a quick, hard and fast turn instantly without worrying about over- or under-steering, and you can do long, smooth banking turns at full speed. I was impressed with its overall speed so it should be a good competitor at the track.

The aircraft handles the wind without a problem and it’s a good daytime flyer, but not as good when it gets dark. The LED lights are visible, just not very bright at a distance. I did notice it would twitch on the throttle every now and again. I don’t know why, but it wasn’t really noticeable while flying, only in close quarters during landing and take-off.

From what I could tell it has the standard two flight modes—normal and advanced. Normal flight mode is good enough for me, but if you want to go full out exponential, you can. Whether you’re a new racer or an experienced one, you should be able to get the type of flight experience you want from the Parkour 280. There’s no return home feature, GPS waypoint feature, or altitude hold feature, but for 210 bucks you can’t really expect those things on a brushless racer.

Although you can use your own transmitter if you want, the included Flysky FS-i4X transmitter works great and fits in the carrying case nicely. It’s a 6-channel transmitter with servo reverse switches, a trainer port, and a bind key, so it has what you need and it gets really great range.

There is a noticeable lack of telemetry from the aircraft, and there is no on-screen display on the video stream or on the transmitter showing your voltage or flight time, so you need to keep your eye on the aircraft during the flight and land it as soon as your lights start to blink. It’s the only way you’ll know when your battery is running low. Also, the lack of an included video monitor means you can’t use the camera unless you have a monitor.

The camera itself is a pretty nice 700 TVL camera with a good wide angle lens, and the video quality and range are really impressive. I didn’t notice any interference and I had absolutely no trouble locating the video stream as soon as I turned on the aircraft. I also really like the mounting bracket, as it does a good job absorbing vibration and quick movements and you can easily strap other cameras to it. The only down side is you can’t easily carry the FPV camera and a GoPro camera at the same time without coming up with a new mount. 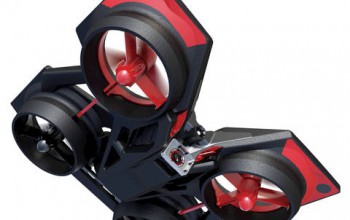 Air Hogs is one of the undeniable kings of the R/C toy aisle. If you walk into any Wal-Mart or Toys-R-Us, you can usually find Air Hogs products dominating the ...

I had a lot of fun flying the Parkour 280. It was easy to use and other than the canopy falling off I didn’t have any problems. The FPV video looked nice with no delay, the aircraft did what I told it to when I told it to, so it should make a good racer. The only down side is that it’s so new that spare parts may be a little difficult to come by. The speed controllers, motors, and rotors are all pretty standard and easy to replace, so it’s things like the clamps that hold the rotor arms in place and the CF body parts that might be hard to find. Other than that I think it’s a nice little racer at a good price.
7