Welcome to the future. Are you ready to fly?

If you are, then your options are almost limitless. You can fly helicopters, airplanes, quad rotors, hexacopters, racers, blimps… you name it, and someone sells it. However, that also means that a lot of innovations can easily be overlooked.

10 years ago, a hexacopter would have cost you more than a thousand dollars to build and would have been a huge, ungainly aircraft. The only reason you would have wanted such an aircraft would have been for extra lift to carry an HD camera or other heavy equipment. Since then, the hexacopter has evolved significantly and become much more commonplace these days. Now you can pick up a 4-inch wide hexacopter from WLtoys for just $20, and it’s surprisingly easy to fly! You might think that the R/C community would be all over such an aircraft, but strangely, Nano hexacopters just haven’t seemed to catch on. There’s nothing wrong with Nano hexacopters, it’s simply that Nano quad rotors are less complex and easier to manufacture.

WLtoys has recently given us some amazing R/C aircraft, including the V-931 Nano collective pitch helicopter, one of the best Nano CP helis on the market. Therefore, it’s no surprise that they decided to tackle the Nano hexacopter. They have a good background in aircraft engineering and generally make high-quality aircraft. They know how to make good quad rotors, but a Nano hexacopter is a completely different beast. Most chairs have 4 legs, so adding 2 more legs means more legs that can wobble. The same thing is true with aircraft; more rotors are more difficult to stabilize, but WLtoys pulled it off.

It’s not the first Nano hexacopter on the market, and it’s not the smallest hexacopter in the world anymore, since the Fayee Navigator recently took that title. However, it is a tiny, easy-to-fly, and inexpensive aircraft that looks great in any aircraft collection.

The most unique thing about this aircraft is that it uses 6 motors instead of 4. This gives you a tiny bit of extra lift, but not enough to make a huge difference. It’s not going to lift much more then a quad rotor would, but it will be a little zippier outside.

There’s no camera on the WLtoys Tracker, but WLtoys makes a slightly larger version called the Q-282 with a built-in FPV system. It looks exactly like the tracker, only a few inches larger.

The range of over 100 feet is great for such a small aircraft, and considering that the transmitter only uses 2 AA batteries, I was really impressed. The transmitter is tiny and, from what the instructions say, it will apparently function for up to 18 hours on one set of batteries. In other words, the cost of operating this aircraft is very low.

Let’s talk about the way this aircraft looks and how it’s built. Firstly, it has a very distinctive look that really stands out. There are many Asian influences in the design that are very sleek, which give it a lot of personality. The long thin rotor arms are very organic and the aircraft has a short mohawk and a set of glowing eyes that give the aircraft some personality. It’s a strange-looking aircraft and almost reminds me of a character from a long-forgotten 1980s TV show.

The outer canopy is made from semi-flexible plastic that is very tightly fit together and well manufactured. The flexibility of the plastic allows the thin rotor arms to twist, rather than break during hard crashes. As a whole, it’s a very durable aircraft that can handle a large number of crashes. Also, the rotor blades are very common, so even though it comes with 4 replacement rotors, you can easily find more online. The battery charger is also designed to give it a slow, steady charge to lengthen battery life. The stock battery recharge takes about 45 minutes, but you can use a higher mAh charger and recharge the battery in as little as 10 minutes. Patience is a virtue, but time is precious, so using your CX-10 charger will definitely speed up recharge times. Also, considering that you can’t remove the battery and simply switch it out, you might want to use a faster charger.

This aircraft comes very nicely packaged in a box that’s small enough to fit inside your mailbox, and it looks great on store shelves as well. The only thing that the box boasts about the aircraft is that it has 360-degree unlimited eversion. For those who don’t know, when an R/C aircraft says “eversion”, it means that the aircraft can flip. It’s easy to un-box everything in roughly a minute and you can store the aircraft in the box to keep it safe if you want. It’s not a hard plastic box or anything; it’s simply designed to be reusable after you open it to remove the aircraft.

The only hardware you need is a screwdriver to open the battery compartment on the transmitter. After you install the 2 AA batteries and charge the aircraft, you’re ready to fly. It’s a preprogrammed aircraft and there’s no way to access the flight controller to reprogram it, so there aren’t any software tuning options available.

Let’s talk about the manual for a second. I know that I could sit hear and bad mouth the English translation and point out words like “vefevence” being used instead of “reference”, but in fact, I think it’s very important to note that someone worked very hard on the manual. It’s obvious that they knew this might be someone’s first aircraft, and they put together a very helpful set of instructions to try to teach first-time pilots how to fly. It has a few nice tips and it tells you everything you need to know about operating the aircraft, despite the occasional typos.

This aircraft flies smoothly out of the box, but it’s not as smooth as it could be. The gyro that they decided to use isn’t the best on the market, and while there’s nothing inherently wrong with it, I’ve seen better gyros on smaller aircraft. There’s also no way to calibrate the gyro, as far as I can tell. The instructions don’t mention calibrating the gyro and when I tested all the standard calibration methods, none of them worked.

The quality of the gyro means that you may need to give it a little forward backward left right trim when you first start flying, and the headless mode is nothing to write home about. You need to land to enter and exit headless mode, and it fails to keep a good heading lock. There are 2 different flight modes available, low and high speed, and the aircraft does a really good job flying outdoors in the wind or indoors in the office or around the house, allowing you to do some decent precision flying and practicing in the backyard with ease.

This is a great option for aircraft collectors and fans of small aircraft and Hexacopters.

As the box says, it has a pre-programmed one-button flip, and it’s a pretty nice little flip. Hexacopters have a tendency to do quick sideways flips because of the extra motor on the side, and this one is no different, but it can flip rather quickly in all directions.

The provided transmitter looks like a standard 2.4 GHz pocket transmitter. It has the same shape as a CX-10 transmitter, but it has a much better range and feels more solid. I also really like the fact that it uses AA batteries instead of AAA batteries, as they last much longer and are easier to find around the house. The transmitter has one button to flip, another to change speeds, and a set of trims for the right stick. The control sticks have good action and decent thumb pads. It’s all very easy to use and anyone should be able to get the hang of it quite quickly. 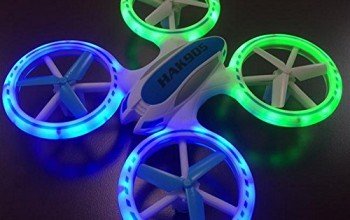 Introduction At seven inches diagonally, the HAK 905 Drone is a unique size that fits right between the tiny drones like the Syma X12S Nano and the larger indoo...

In conclusion, the WLtoys Tracker is not a bad hexacopter at all, but it’s easy to overlook. Considering that the JJRC H20 Nano hexacopter is only slightly bigger, with interchangeable batteries and a lower price, it’s going to be hard to compete, but that’s no surprise. There is a lot of competition in the world of Nano multi-copters these days, and everyone is trying to come out on top!
7