The Walkera Runner was a very popular racing drone that came out in 2014.  This year, Walkera released the Walkera Runner 250 Advance, which is the next generation of racing drone featuring GPS.  The Walkera Runner Advance has some cool design ideas including a frame that protects the main components from crashed, bright LED “head lights”, blinking LEDs that indicate which direction you are turning, and, of course, GPS, which is unusual for a racing drone.  The potential of this racer is tremendous, however, in practice, there are quite a few complexities and shortcomings to watch out for if you decide to buy this drone.

The Walkera Runner 250 Advance is a “250 racing quadcopter/drone”, which basically means that it is 250 millimeters diagonally from motor to motor.  This class of drones is typically called “250 Racers”.  The biggest differentiators between this class of drone and others that you find on the market is the lack of anything unnecessary on the 250 Racers.  They are bare-bones with only the essential components and very little in the way of plastic airframes or cool looking graphics.

The Runner 250 Advance is very much a racer at heart, with all of the key components easy to get to within a carbon fiber frame.  This makes the aircraft as light as possible and easy to repair.  The Runner Advance also features a GPS module, which for a racing quad, is unusual.  The idea is that with GPS, you can easily “park” the craft in mid air simply by releasing the sticks.  Most racers will drift whatever way the wind or momentum carries them.  The Runner 250 advance breaks that convention with a fairly accurate GPS hold mode.

The Runner 250 Advance also features a FPV camera and transmitter with a built in OSD (on screen display) that show up directly in your FPV goggles.  In addition, the Runner 250 Advance has a very cool array of white LEDs in the front that look like “headlamps” from your car.  And red LEDs in the rear that look like tail lights and even blink left or right when you bank in that direction.  The integrated LEDs, to me, are one of the coolest features of this racer!

In my review of the HeliPal Storm Racer, I talked about ordering from the HeliPal web site, which is in broken English.  The Walkera web site is also in broken English and the site is more difficult to navigate.  That aside, after I figured out how to navigate the ordering process and find the copter and parts that I wanted, things went relatively smoothly, although it did take about 3 weeks for my copter to arrive in Texas from China.

Once it arrived though, I have to say that I was impressed with what came in the box.  The Runner 250 Advance comes with a foam fitted backpack to transport the quadcopter and the remote control.  It also comes with 2 sets of extra propellers, the battery, charger, and instruction manual.  The frame a carbon fiber and feels very strong for its relatively light weight.  The components are all very well placed and connected to the frame for aerodynamics as well as easy repair.  Generally, I was impressed with the way the quadcopter was assembled and the quality of the components used.

The quadcopter itself is fully assembled except for the GPS module, which has to be added.  This requires running some wires through the frame and snapping the GPS antenna into place, but is pretty simple and easy to do.  The propellers are self threading and once you figure out the order they go on, they are very fast and easy to put on the copter.

Perhaps the biggest difference in preparing this copter to fly versus other 250 racers is that fact that you have to do a fairly extensive compass and GPS calibration.  If you have ever calibrated the compass on a Phantom or Solo, you will be familiar with the process.  It involves putting the copter into GPS calibration mode and then rotating it on its access both front-to-back and right-to-left.  This allows the compass to set and help the GPS hold the copter steady when you are ready to fly.  After you have put on the GPS module, charged the battery, calibrated the compass, and put propellers on, you are ready to fly!

Generally, FPV racers are not for beginners.  And, despite the GPS giving you ability to hover, this one is not “easy” to fly.  It takes some finesse to get it into the air and hovering.  I find the engines to be a bit sluggish compared to other racers that I have flown, so it takes quite a bit of throttle to get it into the air.  Once airborne, it is pretty stable and will hold in place, thanks to the GPS.  One tricky thing is finding the right channel to receive the FPV video transmission.  This copter transmits on the “B” set of FPV frequencies, which means that it won’t work with Fat Shark goggles…you need Boscam compatible goggles.  Walkera actually sells some relatively inexpensive goggles that you buy as an add on.  Otherwise, the Team Black Sheep module for Fat Sharks will make them work with this quadcopter.

Once I got the goggles sorted out and began to fly, I noticed that the camera was pointing too far into the air.  Fortunately, the FPV camera is easily adjustable and I was able to get it to a spot where it would give me a good field of view for flying.  The other thing I noticed is that the OSD or on screen display, has A LOT of information on it.  Battery status, altitude, heading, angle, and much more!  I feel as though it’s almost too much and am looking for a way to turn some of it off…although I have not figured that out yet! 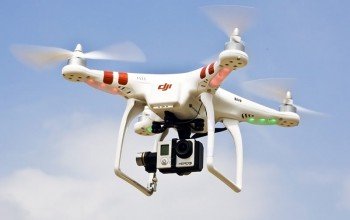 Introduction The Phantom 2 Vision+ was the first ready-to-fly drone sporting a built-in, 3 axis stabilised HD camera with wifi video downlink. Based on the Pha...

If you are looking to get into FPV quadcopter racing, I would not start with the Walkera Runner 250 Advance. While it does have some cool features and comes nearly ready to fly, it is pretty complicated compared to other 250 racers I have flown. For one thing, the GPS installation and calibration is tricky. For another, getting a good FPV signal requires some experimentation with the transmitter and goggles. Don’t get me wrong, I like the innovation and bought this copter because I was excited about the possibility of flying a racer with GPS. But just like I would not recommend buying the first generation of a new technology product (think Apple Watch), I don’t recommend buying this early version of an technology filled 250 racer. I believe that 2016 will see numerous and vast improvements on the things Walkera tried to do with this copter…but by Walkera and by other manufacturers. To me, the Walkera Runner 250 Advance is a good idea, but given its high price - $400 USD for the base model – I think you can do better if you look around at other copters and buy something with fewer bells and whistles.
5