If you’re serious about aerial photography, then the Snelflight Ghost should be on your radar. You have a lot of choices when it comes to multirotors, and making the right choice can be the difference between good shots and great shots. The Ghost combines everything in a way that is affordable and easy to use and gives you those cinematic shots that you’ve always wanted.

Snelflight isn’t new to the world of multirotors. In fact, they’re one of the pioneers of the hobby. One of their first aircrafts was called the HoverFly and can be seen in the movie Tomb Raider 2. Noah Taylor (Bryce) lands one on his desk as Laura Croft walks into his office. The HoverFly was an amazing little aircraft that looked like a love child between a helicopter and a quad rotor. It had a helicopter body and three long spinning rotor arms on the top. At the end of each spinning rotor arm was a motor with a propeller on it that generated the lift. It was a strange design with a lot of engineering behind it. They followed up with the Alien Jump Jet in 2008. It was the first commercial palm sized quad rotor, and it was way ahead of its time.

The Ghost is equipped with a dual axis brushless gimbal, a GPS system with a built in return home safety feature, an altitude hold system, a 5.8 GHz video transmitter, and a standard OSD system. It’s completely ready to fly, and it’s factory tuned, so beginners can get into the air with no trouble. It can also be modified and upgraded if you want to add features like waypoint navigation.

The ready-to-fly package is a truly cinematic camera system. It uses an SJ5000 camera that can record 1080p video at 60 frames per second, and you can get 240 fps if you lower the resolution. You can use any standard 5.8 GHz video monitor to watch the video in real time, and you can turn the camera’s WI-FI feature on and watch the video stream on your smart phone. The wide angle lens, the high resolution 60 fps video, and the stable fast moving aircraft / video platform gives you the ability to pull off shots that once required a dolly, a truck, or a helicopter to achieve.

The included RX-LCD-5802 monitor has every feature you could want in a video monitor. It uses a diversity dual antenna receiver. It has audio-video ports so you can stream the video out to another monitor, and you can stream an A/V signal back in. It even has built in speakers!

The video transmitter on the aircraft is amazing and is definitely up to the challenge. I could easily reach the FAA flight ceiling of 400 meters if I wanted.

I love the look of the Ghost. It’s beautifully sculpted with a very nice black and white color scheme. The gimbal is a bit exposed with a lot of wires sticking out, but it still looks good. One of my favorite design choices is the set of legs on the bottom of the motors. They’re made of dense foam that makes for a very soft landing, and they make the engines look like long sleek jet engines. They also give you a 5 inch tall by 8 and ½ inch cube of space for any payload you want to carry. The main body of the aircraft is constructed using a very strong, two-part plastic shell with a nice finish, and the gimbal is solid machined aluminum. When you see it up close, it’s obvious that someone put a lot of love into the lines, shape, and overall layout of the aircraft.

It’s sturdy and robust and has the potential to last for many years. It can handle a low altitude crash, but I don’t recommend crashing any aircraft that costs as much as a mortgage payment. The aircraft and transmitter alone cost $497.29, and when you add in the camera, the gimbal, the FPV transmitter, the monitor, and the battery charger, you tack on another $596.84. It’s a bit expensive, but when you see the quality of the video, you’ll quickly realize where your money is going.

Unless you live in the UK between Edinburgh and York, you’ll need to have the Ghost shipped to you. It will come in a giant box full of foam peanuts, and it will be packed inside another giant box. The SJ5000 camera comes in its original box with a waterproof case and a bunch of clamps. The video monitor also comes in its original package with a bunch of adaptors and chargers.  Everything comes completely ready to fly. Just charge your aircraft battery, put eight AA batteries in the transmitter, and you’re ready to fly.

It uses a DJI Naza MV2 flight controller, so it’s completely configurable, and the gimbal also has the ability to be reprogrammed.

I strongly suggest reading through the manual before you fly. They put a lot of work into every page, and it’s full of very important and useful information. It also details a few things about the camera and monitor that the manufacturers left out of their manuals.

Words can’t describe the difference between this aircraft and a low-cost camera drone. My first flight was amazing. When I armed the engines and raised the throttle, it roared into life with a deep sound that actually made me feel like I was flying a real aircraft.

In heavy winds, the aircraft can lean almost 90 degrees to fight the wind, and the gimbal stays level and steady the whole time. It’s amazing how stable the video is no matter what the weather conditions. It’s also very fast and perfect for doing high-speed dolly shots that you otherwise couldn’t pull off. If you need your camera to quickly pull away from a subject or to quickly move through a shot, this is a great platform. You can also slowly follow a subject at close range for long distances with great success. It’s a really great cinematic tool.

The aircraft has three preprogrammed flight modes: altitude hold mode, GPS mode, and return home mode. The altitude hold mode doesn’t use the GPS satellites and is the most aggressive flight mode. If you let go of the sticks in this mode, the aircraft will stay at the same height but will drift with the wind. In GPS mode, when you let go of the sticks, the aircraft will stay at the same height and will not drift with wind. When you flip the switch to return home, the aircraft goes to an altitude of about 60 feet, flies back over to the location where it launched, then slowly lands itself. This aircraft is perfect for cinematographers who want a ready-to-fly system capable of being upgraded.

The range is also amazing, and if the signal is ever lost, the aircraft will immediately fly home until it picks the signal back up or until it lands itself.

The provided 6-channel transmitter works perfectly for this aircraft. It has a turn knob for manually tilting the camera up and down, a set of servo reverse switches, and a switch for changing between modes. It also has the same black and white color scheme as the aircraft.

The only telemetry you get is the aircraft’s voltage displayed on the monitor, which is a very important piece of data to have.

I love the SJ5000 cam, and I use it on almost all of my aircrafts. It gives me true, 1080p video at 60fps, and it looks great. It also has some amazing high speed video capabilities. I also regularly use the RX-LCD-5802 video monitor with all my 5.8

The brushless gimbal is steady with a huge range of motion. It holds a camera better than I can, and it can tilt up and down almost 90 degrees 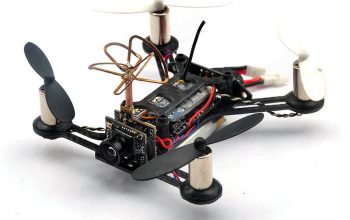 I love this aircraft. I believe the one I was sent was probably the second one ever made, so I might be a little biased, but it’s a hand crafted piece of engineering. Also, the inventor of the Ghost is a really nice guy who is more than willing to help you with any modifications or questions you might have. I’ve known him for a number of years, and he is a brilliant aircraft designer, and his company offers great support. I’m proud to have a Snelflight Ghost in my collection.
7