The CX-91-B is designed to look cool and is sure to entice new racers. It’s also a Cheerson aircraft.

Cheerson gave us the very popular CX-10, one of the world’s smallest quad rotors. It was a real sensation and started a revolution in nano quads. Hundreds of clones popped up soon after, but Cheerson had really dominated the nano market for some time, regardless of the copycats. They’ve made an effort to duplicate that success with larger aircraft, and the CX-91-B jumper is the latest attempt.

Going from nano quads to FPV racers is a big leap, but Cheerson did a pretty good job.

The CX-91-B is a serious brushless racer with triple-bladed props and a lot of power. It also comes with a small set of VR glasses that look very stylish. In fact, the VR glasses were one of the main reasons I wanted to test this aircraft—that and the fact that it looks so powerful and well built. It uses 1,805 brushless motors and triple-bladed props, so it gets all the lift it needs. The VR glasses are very unique with two built-in video screens, one for each eye, but the aircraft only has one camera so it doesn’t actually display a 3D image. The FPV camera is a one megapixel camera, and the video transmitter is amazing with a video range of about 300 meters. The aircraft itself has a range of about 500 meters.

The camera also has a built-in digital video recorder so that you can slide the included micro SD card into the aircraft and get a nice, high-quality video of your flight. This is a feature that very few racers bother with, but I really enjoyed it. I was able to get some very nice crisp clean video of my races.

The FPV video is transmitted to a small video monitor that attaches to the transmitter, and that little video monitor has a video out plug that sends the video signal to the glasses. The glasses themselves don’t have a built-in receiver, but they do have a built-in battery so that you can plug them into your TV and watch movies with them. I watched a little bit of Pacific Rim while wearing them, and it looked pretty good; the only downside of having the two screens is that you might feel you need to adjust them for your eyes, but there is currently no way to move them closer together or farther apart. They wear decently but were a tiny bit off for my eyes.

Another important feature is durability. If you race FPV, then you are most likely going to crash at some point, so it’s good to have a durable aircraft, and this aircraft is certainly durable.

The aircraft looks like a flying race car, and the VR glasses look like something out of a sci-fi movie. They certainly did their best to make everything looked really good. The canopy is held on with four cotter pins, sort of like an RC race car, and the triple-bladed rotors make it look mean. The body and rotor arms are made from one single piece of reinforced plastic, and the flight controller and speed controllers are integrated into the main circuit board. I crashed it a number of times without causing any damage other than bending the rotors slightly. I was surprised by its durability, and it is a bit of a concern that all four speed controllers are integrated into the main flight controller circuit board. It means if you burn one out, you have to replace the whole board. The same thing applies to the rotor arms; if you break one, you’ll need to replace the entire plastic body frame.

It is easy to disassemble the aircraft if you need to repair anything, but I had good luck with it even after some pretty hard crashes.

Everything came in its own little box—the aircraft, the transmitter, the rotors, and the monitor all have their own boxes, and they all fit inside one large box.

The only tool you need is the included wrench for making sure the rotors are tight.

The rotors click onto the motors with a quick release system with the wrench.

Programming a quad rotor makes all the difference in the world, so it’s understandable that a company would want to protect their hard work. On the other hand, it may just be a cost-cutting measure.

Out of the box, this aircraft is pretty smooth and very fast. I didn’t have any trouble controlling it, but it does get a tremendous amount of lift with the triple-bladed props. It can turn smoothly at full speed, and it is programmed with two flight modes. The low throws mode is fast and agile, and the high throws mode allows for acrobatics and faster speeds.

I was able to fly through obstacles at low speeds and around pylons at full speed. It was a good flight experience, but it takes an experienced pilot to push it to its limits without crashing it. I feel like with enough practice, it could be a good racer, and I think it shows promise for Cheerson’s programming ability. I did have a few oversteering issues when going through obstacles at high speeds, but I think that is more of a pilot issue than anything else.

I couldn’t really tune anything about the aircraft, so it is truly an RTF experience. It’s designed for someone who wants to buy a serious racer and go out and fly the day they get it. It’s not designed for tinkerers or people who like to constantly modify their aircraft. It doesn’t have any preprogrammed stunts or follow me modes, but it does get really good range.

It comes with a pretty simple transmitter with the CX-91 name branded on it. It also works really well and gets an amazing range of 400 to 500 meters. The video transmitter and receiver are also amazing with a range of 300 meters. I absolutely love the video signal from this aircraft; because there is little to no static and the range is phenomenal, you can just keep on flying. The two mushroom antennas work really well, and I think the FPV range is the best of any aircraft I’ve tested.

There is no telemetry displayed in the FPV stream, but the aircraft does have a loud low voltage beeper and a traditional auto land system when the battery gets dangerously low.

The VR glasses don’t block out the outside world completely. You can still see your feet and a little bit of sky while wearing them, and the screen doesn’t look too terribly big; I prefer my Eachine 007 VR glasses. However, the jumpers’ glasses are very nice and small and stylish compared to a big bulky set of 007 VR glasses. The image is also very clear, and it is nice that you can also watch movies with them.

The flight video from the camera looked good, but it did drop a few frames here and there, maybe because of the SD card’s class. I used the included 8 gig micro SD card, but it had no identification on it other than its size, so I think it could easily be upgraded to fix the problem.

I found everything pretty easy to use, and the manual was very informative. The only thing I had a little trouble figuring out was the VR glasses because the manual didn’t contain any information about them. They are actually an add-on for the high-end RTF version, so it doesn’t surprise me that the manual doesn’t have info on them yet. 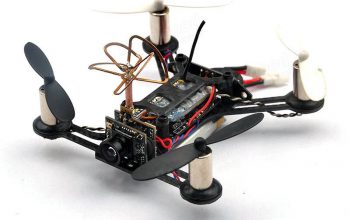 If you want a good ready-to-fly experience at a decent cost and if you have a little flight experience, you will probably really enjoy this aircraft. I found it to be durable and easy to use. It was fast enough and had decent maneuverability; it was a little overpowered on tight turns from time to time but was definitely well built. If you like to upgrade, tweak, and modify your racer, then this one might not be for you, but if you want a good RTF experience, then check it out.
7