The Tarantula SPIDER Drone is manufactured by a company called YiZhan. I had never heard of YiZhan until recently but after flying the Tarantula SPIDER, I have to say that I am impressed with this quadcopter, especially considering its price of $25 USD for the version without a camera. Now let’s be clear, this is what I consider a “toy” class drone and not something you will be able to use for serious photography or for racing. However, for a toy, it has a lot of power and some cool features that help it to stand apart from the rest of the toy drone crowd.

To begin, the Tarantula SPIDER is a well designed and nice looking drone. It has cool graphics, a rounded canopy, and landing gear that actually look like spider legs. It is also taller than most other drones in its size class, which means that it is easy to take off and land in grass without getting caught.  It has bright red and green LEDs for orientation and night flying. It has three flight modes (beginner, advanced and expert), a headless flight mode, a flip button, and a good sized remote control considering its class and cost.

On the box that my Tarantula SPIDER came in, the word “camera” is written next to a picture of a camera lens, however, my Tarantula did not come with a camera. From what I can tell, the box is the same for versions with and without the camera, which means that you should use price as the key indicator as to whether it includes a camera or not. My Tarantula SPIDER was $25 USD, I believe the version with the camera costs more in the $50 – $75 USD range. So be careful to read product descriptions to make sure you purchase the one that you want, with or without a camera.

The Tarantula SPIDER is clearly an inexpensively built drone. It is almost entirely plastic and does not have much mass to it. The down side is a more fragile fuselage and arms.  The upside is a very low price and a lot of punch from the motors.  I have to say that it is one of the more light weight drones I have flown in this class and it does not feel like it could stand up to much abuse. The remote control is pretty standard for this class of quadcopter and the battery compartment is a bit smaller than it should be, making the battery difficult to take in and out.

The Tarantula SPIDER comes with four prop guards that you can add using small supplied screws.  If you are going to fly indoors, then it might be worth adding the prop guards to protect things in your house. But if you intend to fly outside, then I would just skip the prop guards. The SPIDER also comes with two landing skids that just snap on to the bottom of the quadcopter. These landing skids make the drone seem very tall and give it the “spider” look  that the name implies.

The battery is charged with a USB charging device and takes about 90 minutes to fully charge. Once the battery is charged and you are ready to fly, you have to place the Tarantula on a level surface and turn it on. This calibrates the gyros and allows you to bind it with the remote control by pushing the throttle stick all the way up and then back down. After you’ve done this, you will hear a beep and the lights will stop blinking, indicating that you are bound and ready to fly!

The day I test flew this drone, there was a 10 – 12 mile-per-hour (16 – 20 kilometers-per-hour) breeze blowing at a constant rate.  Generally a light-weight drone like this would not do well with that kind of wind.  And when I first took off, the drone struggled not to get blown away. However, a simple push of the upper left button, changed the flight envelope from “beginner” to “advanced”, which made a huge difference in how the Tarantula handled the wind.  When you switch into “expert” flight mode (one more click of the same button), you will find that the quadcopter will fly at very steep angles and, while more effective in the wind, this mode can be challenging to control.

Here are a few notes about flying in “headless” mode. First, the headless mode works well if set up properly. To switch to headless flight mode, you push the appropriate button on the top right of the control. It is important to remember where the copter is in relation to the remote when you go into headless mode. Flying headless is 100% relative to where your drone and remote are when you go into that mode. For the novice pilot, headless mode is a great way to keep from losing your orientation. I recommend it if you are just learning to fly, but also suggest that you don’t become too dependent on headless mode. It’s a great stepping stone to get started, but flying without it is the only way to become a better and more effective pilot.

One last note about landing this drone. If you have the landing skids on, you will bounce all over the place if you try to land on a hard surface. The landing skids are a thin, flexible plastic that act like springs when they hit something hard. My suggestion is to take off and land on something softer, like grass, until you get used to flying this drone. 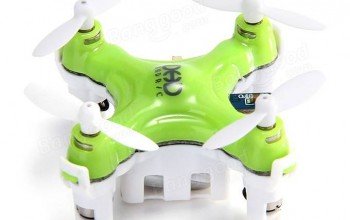 As an R/C enthusiast and reviewer for over a decade, I’ve had the opportunity to test nearly all of the world’s smallest aircraft, but the D1 Drone from DHD is ...

The Tarantula SPIDER Drone is an inexpensive and stylish little drone for recreational flying. It has three flight ranges that really allow you to customize your flight experience under different circumstances. It also has the ability to go into “headless” mode, which makes it very easy to fly for novice pilots. The packaging is a bit confusing because it mentions a camera on the box, but the one I ordered (for $25 USD) did not have a camera. I imagine that the camera comes with the more expensive ($75 USD) version. The LEDs are very bright and the motors are strong for a quadcopter of this size. It is well designed with cool graphics and landing skids that look like spider legs. For a beginner or someone who wants a good drone to practice with, you can’t beat it for the price!
6