I’m a big fan of Syma quadcopters.  The Syma X5C and X8C are two of my favorite low cost beginner copters.  So when I saw the Syma X9 Flying Car on Amazon, I was very excited to give it a try.  Upon receiving it in the mail, unboxing it and taking it for a spin, I soon realized that the name “flying car” is probably a bit misleading.  It actually behaves more like a quadcopter that you can drive, but more on that later.

It’s a very unique toy that works as advertised giving you the ability to drive it on the ground (as long as the surface is smooth) and then, very quickly and unexpectedly, take off in the air!  It can do the standard stuff that toy quadcopters do these days, high/low range and flips, but the real fun comes in driving it (as a car) off the edge of tables and other high surfaces, and then taking off into the air just as it starts to plummet to the ground!

The most obvious difference about this quadcopter is the fact that it has 4 small wheels under the 4 propellers. It is a very cool and futuristic looking craft that looks like it came from some crazy concept car design shop. The remote control is the same remote that comes with the Syma X5C and X8C, which is great if you own one of those. That immediately means that you can use this remote with other Syma products and vice-versa. It also comes with 2 batteries, which is great because you can charge one while you are flying, increasing your time in the air (or driving on the ground) dramatically.

This quadcopter is definitely a “toy” grade with mostly light plastic components. This is not to say that it’s poorly built, because it is not. The copter’s design is really cool considering the fact that it can fly and race along the ground. One complaint I have is that the wheels are very thin and small. This means that it is not great for rolling on anything other than a fairly smooth and level surface. I tried it on carpet and it did okay, but when I took it out to my garage and drove it on the smooth, level concrete, it ran quite well.  I had a few “touch and go” bumps on the ground when I tried to complete a flip too close to the ground and these did not seem to bother this little guy… it bounced right off the ground and kept right on flying.

This quadcopter comes fully assembled with one battery in it and one in the package.  The batteries come with a small charge (about 20%) from the factory, but I highly recommend taking both batteries out and charging them to 100% before your first flight.  Getting the battery compartment door open is pretty easy, but actually removing and then inserting the battery back in (after it is charged) is a bit of challenge because the compartment is small and there is really only one way that the battery can go in and allow the door to close. This is important because I did have the battery door pop open one time while I was driving it as a car, which caused it to stop completely and immediately.

The copter also comes with four spare propellers, a small screw driver, and a USB charging cable. One cool thing is that the USB charging cable is the same one that works with the batteries for the Syma X5C, so even though the batteries are not cross compatible, at least the chargers are.  I also found that this copter tends to get out of balance very easily which makes it pull hard in one direction. The fix for this problem is to simply turn it off (there is an on/off switch), set it on a flat surface, and then turn it back on to allow the gyroscopes to recalibrate. But once you get it all set and calibrated on a level surface, it is actually a pretty agile little flyer!

As I mentioned in the introduction, this copter is a drone first and a car second. The flight characteristics are very similar to other quadcopters in its class and size with one notable exception. Because it has to carry the weight of four wheels, steering servos, and motors for the wheels, it is heavy. This means that it is a bit more sluggish to fly than I am used to.  And while it has a low and high flight range, neither is very zippy or responsive. It is actually more difficult to fly in low range because it pretty much just wants to sit flat. And when you do get it going in one direction, its momentum tends to keep it going and makes it hard to steer or quickly change direction. In high flight range it is better, but still a bit sluggish when you take off or change direction. It also needs at least 9 feet (3 meters) of height if you plan to flip it. It flips very well but does lose a great deal of altitude when you flip due to its weight, which means you will hit the ground if you try to flip to too low.

Even with its extra weight and slightly under powered motors, it is still a decent flyer and a ton of fun. It also looks really cool when it’s in the air because you really notice the wheels and concept car styling, which makes it look like a car flying through the air. Driving it on the ground is a different story. If you plan to drive it, be sure your surface is level and smooth. One thing that you must get used to is that you only drive with the right stick, meaning that you push the stick forward to go and then forward/right to go right, forward/left to go left, backward/right to back up right, etc.  Most radio control cars either use 2 sticks, one for throttle/direction and the other for steering left and right or have a steering whell on the controller. Because the left stick on this one is activates the propellers and controls the yaw (spin) in flight, you have to get used to driving it with one stick on the ground. Generally, it’s not hard to do, just takes some getting used to driving it on the ground. 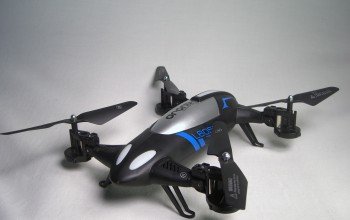 The flying car isn’t a new concept. In fact, inventors have been trying to make it a reality for almost a hundred years. In 1917, the Curtis Autoplain showcased...

This “flying car” is more of a “driving quadcopter”. Under ideal circumstances (smooth, level ground) it is a decent driver with a unique, one stick control system. In the air it flies as well as other quadcopters in its class, if a bit more sluggishly due to the extra weight it carries from its wheels, steering, and ground motors. The styling is really cool and the ability to drive it off the edge of things like tables, curbs, even roofs and then hit the left stick to engage the propellers and take flight is very cool. I think a cool trick to do with it would be to set up a ramp to jump off, get some speed, jump and take flight mid air. If you remember Evil Knievil, the dare devil stunt man who jumped his motorcycle over multiple school buses parked end to end, then you know the thrill I’m talking about when it comes to jumping from a ramp and then taking flight! The Syma X9 Flying Car is just the ticket for those of us who grew up wanting a flying car but never thought we would actually own one.
7