The Syma X5UW is a nice upgrade from the Syma X5C-1. This new model boasts a very cool metallic paint job, sleek body style and a video game inspired remote control. It comes with all the standard features that you see in drones around this price range today – headless mode, altitude hold, and a decent Wifi FPV camera system. This is a great beginner drone and, because it’s a lot of fun to fly, it’s a great practice drone for pilots who want to improve their skills and look cool while doing it!

The Syma X5UW is a very sexy looking quadcopter. I have never seen a drone with a similar paint style. The body is painted a metallic red color that really does look sharp! While it is just about the same size as it’s cousin the Syma X5C, to me it looks a bit smaller. I think this is because the arms are a bit thicker and the body is definitely bigger in the middle.  The landing gear is also improved from the Syma X5C. On the X5UW, the landing gear is lower profile and there are four landing skids instead of two. This makes for smoother take offs and less “bounce” when the craft lands on a hard surface.

The camera fits nicely over the battery door and can be plugged or unplugged if you decide not to use it. The battery, while it is a similar 1S 500mAh as the old batteries, is now a different shape. This is convenient, but unfortunate because it means that you can’t use your old Syma or Hubsan 1S batteries with it. The remote control on the X5UW is white and looks a bit like a DJI Phantom remote with red accents.

Given its price, the Syma X5UW is pretty well built. Because it is mostly plastic, it is very light-weight. But despite its lack of heft, it looks and feels well built. The design is very cool looking. The battery fits nicely into its slot without having to play with any plugs or connectors. The camera is sleek and fits nicely onto the battery door. The landing gear is fairly rugged compared to other quads this size. And finally, the remote control, while small, feels like a controller for an X-Box or Playstation. Again, my only complaint is the fact that the new battery plug, while convenient, does not work with the old Syma X5C batteries, of which I have about 30. One other note is that this quadcopter, like most, handles and flies better if you leave the prop guards off of it. While the prop guards are good for beginners, I feel that they slow the quad down considerably and make it much more susceptible to wind.

There is not too much you have to do before you get the Syma X5UW into the air. Charge the flight battery and put the AA batteries into the remote. It comes fully assembled with the landing gear and propellers already attached. As I mentioned before, unless you are totally new to flying quadcopters, I would recommend leaving the prop guards off for improved performance. Be sure that you place the drone on a flat, level surface when you turn it on. And be sure that you bind it to the remote by running the throttle all the way up and then all the way down before you fly. When you first plug in the flight battery, the LEDs will blink fast on the quad and then slow down. Once the blinking slows down, you can bind it with your remote. And once you have bound it, the lights will stay solid meaning that you are ready to fly!

Just like the Syma X5C, the Syma X5UW is a blast to fly. It has two flight ranges – high and low – and both work well. I generally prefer the high range, which is much more responsive and agile – but if you are just starting out, the low range works well and gives you  more time to react as you learn. The throttle stick is pretty sensitive, so when you take off, you may have to back it off a bit when you get into the air so that you don’t go too high right away. The flips on this quadcoper are crisp and don’t cost you a lot of altitude, so you can do them fairly close to the ground without crashing. The FPV on the app works surprisingly well when you are close to the quad.

The image comes in very clearly and the delay is minimal. I would not recommend trying to fly it FPV using the app because there is enough delay in the video stream that you could hit something before you realize it, but for seeing what the copter sees, it’s a nice feature. The other thing that I really like about flying this quadcopter is the altitude hold. This is becoming a common feature on mid-priced quads these days and it works exceptionally well on the Syma X5UW. The barometer can tell the difference in air pressure at different altitudes and uses that information to keep it hovering at approximately the altitude you set it to. But keep in mind, this quad has no GPS, so while the altitude hold will keep you at the same height, the wind will push this guy around unless you actively keep it in the same place with your controller. Overall, it’s a ton of fun to fly! 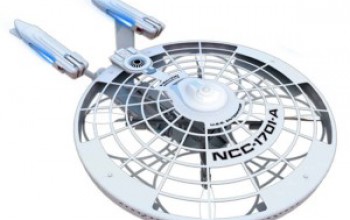 I love Star Trek, and so do countless people around the world, it’s been a part of our lives for 50 years and it’s found its way into almost every aspect of our...

Overall, the Syma X5UW is a really solid beginner or practice quadcopter. It looks really cool, flies well and has a decent app that you can use with it. While it streams video pretty well, the quality of the video that it records is not great – but I think that is to be expected in a quad in this price range. I have been flying the Syma X5C and the X5C-1 for about two years now and I believe that the Syma X5UW is a nice step up from those two quads. Its lack of GPS is a bit disappointing because I have seen more and more lower end quadcopters starting to feature GPS. But it makes up for the lack of GPS with a solid altitude hold mode and a really good power to weight ratio. If you are looking for a first quad or perhaps something you can give as a gift this holiday, the Syma X5UW is a very solid choice. It’s not the best out there, but for the price it is a good value and even if you graduate to bigger, better and more expensive quadcopters later, the Syma X5UW is one that you can play with for years and never get bored with it. Highly recommended!
7