If you’re a serious racer looking for the most powerful aircraft that you can find, then you should definitely check out the new Eachine Falcon 180. This is the latest racer from Eachine, and they aren’t messing around with this one. It’s a pure racing machine that’s been designed to push the limits of what a racer can do. All the extraneous bits, like on- screen displays, headlights, GPS, and aesthetics, have been sacrificed for speed.

This isn’t Eachine’s first brushless racer; in fact, over the past year they’ve come out with at least six new aircraft models. The first one was called the 250, and it was a real sensation and a lot of fun to fly. Over the past few months, racers have evolved to become smaller and faster, and Eachine has definitely kept up with the trend. They released a few 180 mm-sized racers, including the Assassin and the Blade, but the Falcon 180 is the first to use full-sized 2204 2300 KV motors on a 180 mm-sized aircraft.  That’s like putting a V8 engine in a two-door hatchback. They’ve also tilted all four engines slightly forward, which is like adding nitrous.

This aircraft hates to sit still, and because of the tilted motors you actually have to lean the aircraft back at a slight angle when you want to hover. You’re definitely going to want a nice pair of FPV glasses because this aircraft is built solely for FPV racing.

When I took the Falcon 180 to the park for its maiden flight I was not flying FPV, and it was so quick that it went over a tree and into the woods before I could stop it. I don’t know if you’ve ever tried to fly an aircraft without being able to see it, but it’s pretty much impossible. I would have been out of luck, but fortunately I brought my FPV glasses with me and had them sitting on top of my head and tuned in to the FPV camera. I was able to quickly pull them down over my eyes and start flying the aircraft as if I were in the pilot’s seat. The video signal was good, and I was able to look around and follow familiar landmarks until I came back over the tree line. It was the first time I ever flew the Falcon through FPV glasses and it handled itself very well.

This is a unique little racer with big, powerful motors, a good camera, and very little extraneous weight. It has a light bar on the back that can quickly be removed, but other than that it has been stripped down and pumped up to the max.

It uses a 700 TVL camera that is cleverly mounted to a vibration-absorbing platform, and it has pretty decent FPV range. You can upgrade your antenna for better range and your battery for better flight times, but the stock set up flies for about five minutes and gets about 300 meters of FPV range in open areas. The top speed is listed at 150 KPH, or just over 93 MPH, but it doesn’t have a speedometer so I can’t easily test that. I do believe that in the right hands it could go up to 90 MPH.

If you were this aircraft’s mother, you’d tell people that it has a great personality. Looks aren’t everything and aesthetics aren’t as important as speed when it comes to being the first across the finish line. The Falcon is basically a flying box with bed stand landing gear. Everything is tightly packed and very square. It’s made of carbon fiber and aluminum poles with a set of plastic tilted motor mounts. You can replace the tilted mounts with flat mounts if the aircraft is too fast for you.

It’s a durable aircraft that can survive a few crashes, but it’s so powerful that  an imbalance in the rotors can actually shake parts loose. I had to replace the landing gear and the clover antenna because they fell off during flight. I also noticed that the light bar on the back has trouble staying attached and tends to fall off during flight. I do suggest replacing the landing gear with foam pads because the metal landing gear bends very easily during hard landings. I also had better FPV reception with a slightly longer clover antenna.

This aircraft comes in a foam-packed box that handles shipping very well, and you can screw on the rotors and the FPV antenna in about a minute. I used my E-cube charger to charge the battery in about 20 minutes, but the stock charger is a slow charge unit.

It comes with the standard Eachine i6 transmitter, and it has three flight controller options ranging from CC3D, NAZE32, and SP racing F3.

I’m sure it will come with a manual eventually, but mine didn’t have one. It uses the standard arm disarm and mode switch setup that all Eachine aircraft use, so I had no trouble getting in the air and flying. Any experienced racer should have absolutely no trouble figuring out this aircraft. You can also reprogram whatever flight controller you decide to use, but the pre-programmed settings worked fine for me.

My first flight was faster than I expected and it was sort of like trying to control an excited child. It has so much power that it wants to move quickly, and as soon as you start letting it move quickly it can get away from you. The fact that it doesn’t have any bright headlights or other distinguishing features means it’s hard to tell which way it’s facing when it’s far away. That’s not an issue when you’re flying FPV, but if you want to fly it line-of-sight it makes it a little difficult when it gets far away.

When you put on a set of FPV glasses it’s a completely different experience. You feel like Superman flying through the air. It handles itself very well during FPV flight and it responds very accurately and quickly. I truly enjoyed flying it with FPV glasses, but not as much by line-of-sight.

I didn’t need to tune anything out of the box, but you may want to remove the light bar to save weight and power.

It has two flight modes available, low and fast, but it’s not set up for negative pitch 3D out of the box.

This is an aircraft built for true FPV racers, people who want speed and more speed, and people who know how to fly; it is absolutely not for beginners.

There are no preprogrammed stunts or return-home features, no altitude hold or auto level; it doesn’t even tell you battery voltage. The aircraft will cut the throttle to land itself when the battery runs low, but it isn’t always a pretty landing, and the second the battery runs low the aircraft lowers the throttle with no warning. It’s a good way to bend your landing gear, so watch your flight time. The transmitter and FPV range are great, and it even transmits audio to your FPV monitor.

There’s no way to do flight planning or waypoint navigation or return-home unless you add a GPS module and reprogram the aircraft.

The 700 TVL camera works great, is repositionable, and has a really nice camera mount. It gets a little dim when flying straight towards the sun but otherwise it’s a good FPV camera in open areas. I did get a little interference around power lines, but that’s to be expected.

Altogether, I found the entire system very easy to use. I had no trouble connecting to the video stream or flying the aircraft, and when I flew the aircraft it truly was a fun experience that could quickly become addictive. 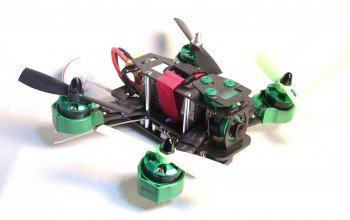 If you’re a serious racer looking for the most powerful aircraft that you can find, then you should definitely check out the new Eachine Falcon 180. This is the...

If you’re truly looking to race FPV aircraft and already know how to fly, then this is your kind of racer. It’s a serious aircraft for serious pilots. It has the speed and power to turn and burn with the best of them, and it’s a lot of fun to fly FPV. It’s not a good line-of-sight aircraft and it isn’t a cinematography platform. But when it comes to speed and experiencing the pure joy of FPV flight, it’s got you covered.
6