New pilots, experienced pilots, young, old—this aircraft is designed for everyone to enjoy. Fly it anywhere and anyhow you want, whether it’s around your house, outside, FPV or line of sight. If you want to race your friends in the office, practice your FPV flight, or just learn how to hover, this is the aircraft for you.

The CX10-WD aircraft is from Cheerson, which is where the C in the name comes from. The CX10 is a very popular line of quad rotors that Cheerson came out with a little over two years ago.

The first CX10 was a Nano quad rotor that was smaller than any other aircraft before it. The flight characteristics were amazing, the charge times and flight times were out of this world, and it was a true sensation.

A few months later Cheerson improved the design and released a version called the CX10-A. It had a better gyro, new programming, and a new paint job.

In Cheerson’s next move, a camera was added and the aircraft was called the CX10-C. This version had a beefed up body and battery but it only flew for about two minutes. The video looked good though.

After that version came the CX10-W, with a built-in WIFI camera. It gave better flight times of about five minutes and it transmitted the video stream to the operator’s smartphone. It could also be controlled with a transmitter or a smartphone.

The CX10-WD combines everything from its predecessors: small size, long flight times, WIFI camera, etc., and now it has the added features of altitude hold, auto launch/land, and FPV flight. That’s right—true FPV flight. The aircraft can also be stored inside its transmitter.

The look of the CX-10 hasn’t changed much over the years, and it’s been duplicated by countless other aircraft. The CX10-WD has a much larger battery compartment than the original; it’s almost all battery on the bottom. If you scaled the aircraft up 10 times, the battery compartment would be a 5 x 10-inch box underneath a 15-inch aircraft.

The construction is the same as previous versions, with a clam shell top and bottom canopy that is screwed onto a flying circuit board and featuring a camera at the front. It has four lights, one on each arm, and a bright blue status light in the battery compartment.

The CX10-WD is a lot more durable than its predecessors, with better technology for determining when it impacts something. If you hit a wall or other obstacle hard enough it will automatically turn off the motors before any damage occurs. It’s a lot more crash resistant than you would think.

I like the transmitter that Cheerson developed for this aircraft. It has two hand grips that spread apart a full two inches when you pull on them. This means that even large smartphones can be held in the center of the transmitter so you can see the video while flying.

You can also store the aircraft in the transmitter underneath a nice little see-through protective case.

Now let’s get to what makes this aircraft so special…….

Cheerson recently updated its smartphone app with a feature that allows you to view the video stream in split screen mode. This means that you can place your smartphone inside a low cost $15 VR headset like Google Cardboard and fly the aircraft around the office as if you in the pilot’s seat.

This is called FPV flight, and it’s becoming quite popular, but it’s usually very costly and most certainly not something you would do in the house or office. FPV aircraft are typically very large, brushless powerhouses and not suitable for buzzing coworkers, unless you don’t want them to be your coworkers anymore.

The CX10-WD opens up a whole new world of Nano office racing. The new auto hover feature is one of the innovations that makes it all possible. It allows you to concentrate less on the throttle and more on the flight. Throttle control while flying FPV in close quarters is difficult, but the CX10-WD takes care of it for you.

It even has a one-button launch/land feature that actually works. When you press the ‘up’ button the aircraft takes off and flies up to the middle of the room; press the ‘down’ button and the aircraft lands itself. All of this is made possible with a microscopic barometer that measures air pressure and adjusts the altitude accordingly. The onboard gyro and accelerometer also make for a very stable flight. In short, Cheerson knows how to program and build Nano quads like no one else.

I was able to fly through tiny one foot-loops with ease while wearing my FPV VR glasses. And I was able to get a lot of good FPV practice in indoors while it was raining outside. I actually used my wife’s VR glasses that we picked up on Amazon for $15. They are great for watching 3D movies, playing VR games, and flying FPV.

The aircraft has three flight speeds and a one-button flip, but one thing that is strangely absent is a headless mode and one-button return mode, which are very common features on this size of aircraft. I’m guessing they left them out because they don’t do you much good during FPV flight.

Whether you’re a serous FPV racer or just starting out, you need one of these to practice with. It’s a perfect all-around aircraft for kids of all ages.

You can use either the transmitter or your smartphone to control the aircraft. The smartphone app has all the standard features of a WIFI heli app, including on screen controls, speed buttons, gyro calibration buttons, and tilt controls so you can tilt your phone instead of using the sticks, and a video stream record function. It also has the new split screen mode, but it doesn’t appear to allow much adjustment of the split screens. They are just basically side-by-side squares with no distortion, unlike a Google Cardboard app that has distorted views.

I was pretty impressed with the app and the transmitter—both are able to control the aircraft with great precision, and the altitude hold makes it that much easier. I was also really impressed with how reliable the one-button takeoff and landing feature is.

It’s all designed to be very user friendly and a lot of fun, it’s a snap to connect to the WIFI signal from the aircraft, and it’s easy to fly the aircraft even in the tightest environments.

That’s not to say that you can’t go outside, because you can; just don’t fly more than 20 meters away. That is the extent of the WIFI range, and if you lose your video signal while flying FPV and crash because you can’t see where you’re going, you’ll have a hard time finding your tiny aircraft in the tall grass.

The video from the camera looks pretty good. It’s only 640 x 480 but the aircraft is less than two inches across so I wasn’t expecting 4K video. The WIFI range will get you into the next room but not much further than that. The range is good for an office or living room, but you’ll have trouble making it up the stairs and around the corner. I would like a slightly wider angle camera lens, but the stock one is definitely adequate for getting some good FPV flight around the office. 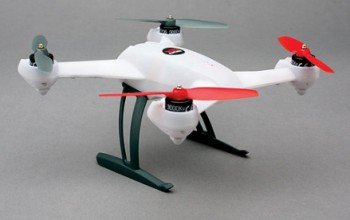 Introduction The Blade 200 QX has been around since early 2014, which in quadcopter time, is a really long time.  It is the little brother of the Blade 350 QX a...

This aircraft is definitely a worthy advancement of the CX10 series, and more than that it’s a great, safe, low-cost way for anyone to get into the sport of FPV racing. I had a tremendous amount of fun flying FPV in places that I never could before. And the pseudo 3D display that the split screen feature gives you helps sell the illusion of sitting in the pilot’s seat. This one is worth checking out—just watch out for the walls, and have fun.
7