If you’re a budding cinematographer, if you need an aircraft that can fly itself, or if you just like video games, you should check out the new CG035.

The main feature of this aircraft is its ability to hover in place and follow the transmitter. It can also hover in a circle and automatically come home and land at the flip of a switch.

There are multiple versions of this aircraft: one without GPS, one with GPS, and one with a dual axis brushed camera gimbal and FPV monitor.

The version I tested was the GPS version without a camera, so I can’t tell you about the stock camera; however, I can give you a good idea of what the quality of the video will be like. I decided to build my own single-axis camera gimbal for the aircraft to see what the video would look like. More on that later…

The range was pretty good; I never lost the signal, but if the signal ever does drop out, the aircraft will return home and land.

This aircraft looks like your classic camera drone, with tall wide landing skids to allow for a camera underneath and a round GPS module on top. The curves and lines are custom-sculpted for this aircraft and look appealing overall. The eyes on the front and other indicator lights are bright and helpful, and the large battery slides into the back like a smart battery.

The body and rotors are made from extremely strong plastic and can handle a hit, but the landing skids are made from less durable plastic and can be cracked in a hard landing. I ended up breaking my landing skids, and I don’t really remember landing all that hard during any of the test flights. Everything else is durable enough to handle a hard crash and keep on flying, and the rotors are going to be hard to break.

The aircraft came pre-built and ready to fly other than the landing skids, which just needed 4 screws to attach. If you get the version with the camera and the gimbal, you’ll need to screw them on and plug them in to the provided plugs. It has 3 standard plugs, one for the camera and one for each of the gimbal servos.

It has a USB port for programming but I couldn’t get cleanflight or openpilot gcs to connect to the aircraft, I also couldn’t find any information abut reprogramming it online.

I’m sure with some work you could connect to it but I think it’s pretty well programmed.

The manual has enough info to get you through the process but it could be more in-depth.

This is a great aircraft to fly; it has a button on the transmitter that you click 3 times to automatically launch the aircraft. It’ll hover itself up to about 15 feet and wait for you to tell it what to do. It responds very smoothly to your inputs and it holds its position and altitude when you let off the sticks. Even in GPS mode you can get some really impressive speed and maneuverability out f it.

Of course you can turn off the GPS and altimeter and fly flat out, and it’ll get up to at least 40 mph. It turns and banks just fine, and it’s got power to spare.

The “hover around a point” feature was one that I was never able to get working properly, but I was able to get the “follow me” feature working, and that’s where the fun is.

It was a little fiddly getting the aircraft into follow me mode from time to time. Sometimes I’d press the button and it would lock right in; other times, I’d have to land and reset before I could get it to follow me.

When it locks in, it really does follow the transmitter with a pretty good deal of accuracy, and the aircraft can fly faster than I can run. No matter how hard I tried, I could not get away from it or catch up to it. It was crazy to run full speed, look behind me, and see this drone chasing me. And it was no trouble for the drone; no matter how fast I ran the drone was just like, “ meh, I can keep up with this”. If that drone wanted to catch up to me and start enslaving the human race, it could have.

In “follow me” mode, you can change the aircrafts altitude and position relative to the transmitter, but you can’t change the heading. If you spin it to a different heading and let off the controls, it will spin back to the original heading. It’s a good way to film yourself walking and talking for a video; it’s also good for homemade videogames.

If you attach an FPV camera to the aircraft and strap on a pair of FPV glasses, you can use the “follow me” mode to play real world third person video games. For example, you can try to run around an obstacle course and collect objects while only looking at yourself through the aircrafts perspective.

It’s a good aircraft for a person on a budget who wants a lot of features.

The provided transmitter has a built-in module that the aircraft follows, and it has a number of other features, like the ability to control the gimbal, switch through FPV frequencies, and start and stop recordings. I’m pretty sure it’s an FSi6 transmitter that’s been highly modified because it makes all of the FSi6 sounds that I am familiar with.

There is no telemetry or flight planning; maybe in the future but not right now. Overall it’s pretty easy to use, but I do recommend labeling the switches.

If you get the gimbal version, you’ll be getting a pretty standard 720p camera mounted on 2 servos. Not brushless motors, just standard jittery brushed servos. The test version they sent me didn’t have the gimbal or camera so I built my own. I was able to actually make 3 different gimbals. One that was just FPV, one that was FPV with a DVR and one that was just a GoPro taped to the bottom.

It’s easy to plug almost any camera into the provided plug; it’ll even start recording at the press of a button on the transmitter. And it’s easy to plug servos into the pitch and roll servo ports. It’s a cheap way to make a gimbal, but it’s not really worth it. In fact, the servos jitter so much that you’d be better off having no gimbal at all.

The aircraft has a built-in FPV antenna, but no built-in DVR. The version with a camera and gimbal has a battery built into the camera to power it and its DVR.

I think an experienced person could build a light weight brushless gimbal for this aircraft that would make it a really good filming platform. As is, you can still get some good video with just a GoPro strapped to the bottom. 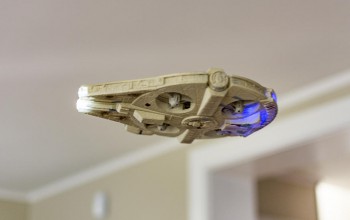 Introduction The Air Hogs Millennium Falcon is intended for all ages, and is the perfect training quadcopter for your kids, as well as the realization of your c...

Welcome to an age where the low cost brush-less GPS autopilot camera drone is a reality. Anyone can pick one of these up and get it flying in no time, and it’s an amazing experience. Whether you’re filming yourself walking and talking or playing your own third person VR game, this is the aircraft for you, or someone on a budget who needs a lot of features from a drone.
6