When it comes to small, indoor quadcopters, Blade Helis has been on a roll lately!  In 2013 they released the Blade Nano QX which has become the foundation for two other small copters that are gaining popularity.  One is the Nano QX 3D, which allows you to practice the challenging world of acrobatic flight.  The other is the Nano QX FPV, which is a great way to learn FPV or “first person view” flight.  This article focuses on the Nano QX FPV and the ways that it can be used to hone your FPV flying skills for aerial photography, racing, and stunt flying.

Flying FPV is challenging.  While some people compare it to playing a video game, I believe that is an over simplification.  Flying FPV requires fast reflexes, the ability to judge distances and a keen awareness of your surroundings.  Add the speed of a racer or the size and weight of a camera platform to the mix and you have a recipe for stress.  That’s where the Blade Nano QX FPV comes in!

The Nano QX FPV is small, light weight, and highly maneuverable.  It comes with a Spektrum ultra micro FPV camera installed and works with Fat Shark goggles right out of the box.  Like most other Blade brand quadcopters, it comes with SAFE (Sensor Assisted Flight Envelope) technology which means that it is very stable and maneuverable.  You can buy it as a RTF (ready to fly) or BNF (bind and fly) kit, which means that you can fly it with any Spektrum 2.4GHZ DSMX radio.  It has built in prop guards, which are great when you are flying indoors.  While the motors are brushed, they are plenty powerful and given the light weight airframe, there is no issue with power.  The Nano QX FPV uses a removable 1S 3.7V LiPo battery, which is great because you can swap batteries any time you need extra flight time and don’t have to wait like you do for quadcopters with internal batteries.

One thing to keep in mind is that in order to fly FPV, you need a pair of goggles or compatible monitor.  The goggles cost more than the Nano QX FPV itself, but once you buy them, you can use them with a wide variety of FPV copters from Blade and other manufacturers.  If you buy the kit that comes with goggles, you will get Fat Shark Teleporter V4 goggles, which are pretty good.  But if you plan to fly other FPV aircraft, I recommend researching different Fat Shark goggles and buying them separately.  Without the goggles, the Blade Nano QX FPV is around $150.  A good set of goggles will run you somewhere between $250 – $500 depending on what model you buy.

After owning several Blade brand quadcopters, I have noticed a theme.  They tend to design their copters for light weight and not for durability.  The Blade Nano QX FPV follows this trend.  At 22 grams, it is very light weight, which is great for indoor flight…less mass means less damage to your furniture when you crash!  However, I have broken one of the arms on mine in what I thought was a light crash.  The good news is that I was able to fix the arm easily with a toothpick and some scotch tape.

The magic of this copter comes in its smooth flight characteristics and clear FPV image.  If you are indoors be aware that common household radio signals can interfere with your video transmission.  Ideally you want to fly indoors with minimal wifi, Bluetooth, cell phones, and RF signals bouncing around.  I’m not saying that these things will completely ruin your FPV experience, but I have noticed a big difference in the quality of the FPV video when I unplug my wireless router and turn off my cell phones in my house.  You won’t be able to completely eliminate interference, but minimizing it helps.

As for the motors and airframe, they are decent for the price.  The motors are removable and can be replaced should you burn one out.  The airframe is light weight and has built in prop guards, which are strong enough to protect the blades (and your furniture) without adding excessive weight or drag to the copter.  And finally, the FPV camera delivers a decent image across the 5.8GHz band using the flight battery as a power source.  Having a single power source does help cut down on weight, but also reduces the flight time slightly when compared to the Nano QX without FPV.

There is not much to assemble with the Nano QX FPV.  It comes with all the propellers installed (as well as some spares).  All you have to do is charge the battery and start flying.  I’d say that most of the “tuning” comes in getting the best FPV video signal.  As I mentioned before, moving away from or unplugging things like wifi routers does help.

The other thing that is a big factor is experimenting with the best channel on your video transmitter and goggles for a clear signal.  To change the channel that the transmitter is broadcasting you simply remove the cover on the Nano QX FPV and push the small black switch on the top edge of the camera.  This cycles the camera through 7 available transmitter channels.  Of course, you will have to adjust the channel on your receiver/goggles to match.  In my experience, this is the best way to find a “clean” signal on your video transmitter.

The binding process for the Nano QX FPV is the same as all other Blade copters.  Simply plug in the battery while the copter is on a smooth, level surface.  You will see a blinking LED while the copter looks for a radio to bind with.  Then hold the bind switch on your Spektrum radio while you turn it on.  Keep holding the switch until you hear a beep and the LED on the copter stops blinking.  Once you have done that, you are bound and ready to fly!

The Blade Nano QX FPV has two vastly different flight ranges:  “pretty easy” (stability mode) and “really difficult” (agility mode).  In stability mode, pitch and roll limits are locked meaning that you can’t really fly too fast or roll the craft over.  Stability mode also features self-leveling when you release the sticks.  In agility mode, the pitch and roll limits are removed meaning that you can fly very aggressively, but also meaning that the odds of a crash are greatly increased.  I really don’t recommend agility mode if you are just learning to fly FPV.  FPV flight is challenging enough without having to worry about keeping the copter level!  I have flown this copter both indoors and outdoors.  Both offer challenges of their own.

Because of the limited pitch and roll in stability mode and its light weight, this copter does not do well in wind.  I only recommend flying outdoors if you have a very calm day or if you have a place that is sheltered from the wind.  Indoors is a challenge because you have a wide variety of obstacles to avoid.  To me, this is the fun of FPV flight.  Learning to fly around, under, and through small spaces has really helped me improve my racing and piloting skills in general! 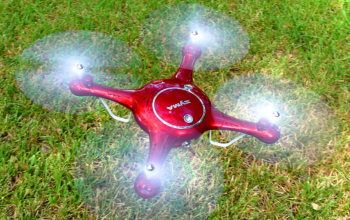 The Blade Nano QX FPV is a great introduction to FPV flying. From its light weight airframe, to its compatibility with Spektrum and Fat Shark, it is an easy way to build and improve your FPV piloting skills. It can be flown indoors or outdoors if there is no wind. The biggest consideration when you decide to buy this copter is what goggles you want to use. I personally have the Fat Shark Dominator 2 goggles and like them a lot. While you are not limited to Fat Sharks, they are a great choice with this copter because they work out of the box with the Nano QX FPV. If you already own Fat Shark goggles and a Spektrum radio, then this copter is an obvious choice. Be warned though…once you get good at FPV flight with this little copter, you may find yourself looking for faster and more expensive copters to learn and fly. FPV flight is challenging and fun. And the Blade Nano QX FPV is a great place to get started in this growing hobby!
7