The Blade 200 QX has been around since early 2014, which in quadcopter time, is a really long time.  It is the little brother of the Blade 350 QX and I originally picked it up to serve as my “sport” quad.  It has no GPS and is therefore a bit more challenging to fly.  When Blade first started to market it, they touted it as a small, stable camera platform.  While it can certainly lift a camera, it is really too small to hold a camera with much stability.

After a few months, Blade realized this and began to market it as a 3D flyer, supporting this with the release of a firmware update that included 3 new flight modes for super sport flying.  For those unfamiliar with 3D flight, it is popular with collective pitch helicopter pilots and basically allows you to fly upside down by instantly reversing the motors on the quadcopter.  The Blade 200 QX is an agile and challenging flyer and is probably best flown by intermediate or advanced pilots.

The Blade 200 QX is considerably smaller than the 350 QX and the DJI Phantom line.  In fact, the 200 indicates approximately 200 millimeters diagonally across the arms.  A 250 racer is 250 millimeters diagonal, so, as you can imagine, this one is slightly smaller.  Its plastic body is somewhat translucent and it has fairly bright LEDs that assist with orientation and allow for night flight.  At 3,000 KV (kilovolt), the brushless motors are powerful for a copter of this size.  You really notice the difference in power if have flown smaller brushed motor copters or larger camera-carrying copters before.  The size to weight ratio is really good and this thing will get up and go when you give it gas!

One of my favorite features is the ability to bind with any DSMX radio.  The most popular is the Spektrum line of radios which work right out of the box with most Blade products.  This means that if you have a Spektrum radio with 5 channels or more, you can fly a wide variety of Blade helicopters and quadcopters, including the Blade 200 QX.  The big advantage here is that the Spektrum radios are better build and have many more features, including the ability to create custom settings, than the cheap transmitters that come with most toy or hobby grade quadcopters.

At over $200 US dollars, the Blade 200 QX is not a cheap toy.  However, it is not as well built as higher end quads like the Phantom, Solo or Yuneec.  The body is thin, translucent plastic and is somewhat brittle.  I know this first hand because I have broken one of the arms, glued it back together, broken it again and ended  up replacing the entire body.  The good news is that you can buy a replacement body from Blade for around $20 and it’s not terribly difficult to pull all the components out and put them into a new frame.  There are also many companies offering modified frames that you can use for your Blade 200 QX.  Many of these frames look more like the 250 class racing drone frames, are more durable and allow you to reduce the weight of your copter.

For the sake of this review, I’m only talking about the stock plastic frame, but I wanted to let you know that there are other options available.  Beyond the frame, the other components of the copter are very nice.  The electronic speed controllers (ESCs) and motors seem to be very precise.  The LEDs are bright, the landing gear is durable, and the standard propellers can withstand a few crashes without needing replacement.

The Blade 200 QX is ready to fly right out of the box.  After you charge the battery and bind it to your radio, you are ready to fly.  The binding process can be a bit confusing, but generally, you want to put the copter on a flat, level surface and plug in the battery.  Then turn on your hold the bind switch on your DSMX (mine is a Spektrum 6 channel) radio while you turn it on.  You will hear a beeping sound and the status LED on the copter will blink.  After 5 – 10 seconds, the beeping should stop and the LED will turn solid.  This indicates that you have bound the copter and are ready to go.  To test, slowly push the throttle up over 50% and the props should spin up.  If that happens, then you are good to go.  If it does not, then unplug the copter, turn off the radio and try again.  If you buy the Ready to Fly (RTF) version, the radio will already be bound and you won’t have to do any of this.

For your first flight, I recommend you pick a place with little to no wind and trim everything out.  You can do this by hovering a few feet off the ground and observing of the copter drifts in any particular direction.  If it does drift, there are 3 ways to fix it.  First, land and turn everything off.  Make sure that the copter is on completely flat and level ground and turn it back on.  The reason this is important is that when you plug in the battery and the copter boots up, it is calibrating the gyroscopes.  If the ground is not level, it will not calibrate properly.

Second, test the copter for center balance by picking it up by 2 fingers in the center of the frame.  Does it want to tip forward or backward?  If so, see if you can get it balanced by sliding the battery backward of forward in the battery compartment.  The closer you can get the copter to symmetry, the more stable it will be in the air.  Finally, you can use the trim switches on your radio to offset drift.  Generally, this should be the last thing you try.

As mentioned earlier, the Blade 200 QX is not designed for beginners.  While it has what Blade calls “SAFE” (Sensor Assisted Flight Envelope) technology built in, its powerful motors are very quick and it is quite easy to get out of control.  The main thing to understand when flying this quadcopter is the different flight modes.  Straight out of the box, the Blade 200 QX comes with 3 flight modes.  “Stability Low Angle” (indicated by solid green LED) is the easiest with a minimum bank angle.  “Stability High Angle” (indicated by solid blue LED) has a much higher bank angle, but still auto levels for you.  “Agility Mode” (indicated by solid red LED) does not auto level, so you must keep the copter level manually.  These three flight modes are fairly self-explanatory and offer a variety of flying experiences.

Where things get really interesting is when you upgrade the firmware and add 3 additional flight modes.  It is important to note that you will need the Multirotor Programming Cable from Blade (Part Number BLH7840) in order to update the firmware.  There are plenty of videos online explaining how to do this.  Once the firmware is updated, you can take advantage of the 3 “Aerobatic Modes”.  These are similar to the other three modes with one major difference:  you can now fly inverted or 3D with the copter.  Also, it should be noted that in order to fly 3D effectively, it is best to change out the stock propellers with Blade’s 3D propellers (Part # BLH7715).  Flying with these propellers gives you a much smoother 3D experience but does reduce your flight time.

Back to the flight modes.  After the firmware update, you will have 3 new flight mode options.  First is “Stability Mode” (indicated by a solid white LED).  This is similar to the old stability modes, but has a bank angle somewhere between the 2.  Second is “3D Stagility Mode” (indicated by a solid purple LED).  This mode gives you the ability to flip and fly inverted but keeps the copter stable.  Inverted flight is accomplished by pushing the rudder or aileron control past 75% and then reversing the motors.  In this mode, any throttle above 50% is positive (normal flight) and throttle below 50% is negative (inverted flight).  It takes some getting used to, but this “3D Stagility Mode” is a great way to learn 3D flying!  Finally,  “3D Agility Mode” (indicated by a solid yellow LED) is the same as “3D Stagility Mode”, but without the self leveling properties.  This is truly an expert mode and I don’t recommend it until you are very comfortable with all of the other modes.

As mentioned above in the “specs” section, Blade does offer an integrated camera with the 200 QX, the EFL – 721 HD Camera.  It’s not a great camera, the controls are wonky, and the footage tends to be pretty shaky.  My general feeling is that this is not an ideal camera platform.  If you do want to shoot video with this copter, my recommendation is to attach a Mobius Action Camera to it with Velcro or zip ties.  The quality is better and you won’t be wasting your money on Blade’s proprietary camera that you can only use with their products.  The Mobius is very versatile and can be used on many flying platforms. 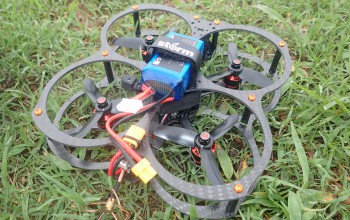 Introduction The FlexRC Owl Storm Edition is my new favorite FPV quadcopter. There – I said it! Feels great to get that off of my chest! Not to get too sentimen...

As a general flyer, the Blade 200 QX is average when compared to other models in its price range and size. Where it really shines is in its ability to fly 3D…especially in “3D Stagility Mode”. I had never flown 3D or inverted before and within five batteries worth of flights, I was pretty comfortable flying this way. I still can’t handle “3D Agility Mode” and don’t know if I want to spend the time to get good at it. To me, 3D flight is a very specialized type of stunt flying that appeals to some people, but not to everyone. However, I will say that even mastering “3D Stagility Mode” on this copter will make you a better pilot. If that’s something you are interested in doing, then I recommend it as a great way to learn to fly 3D. If, however, you are more of a casual pilot – more interested in FPV racing or aerial imaging, than it might be better to save your money for a different quadcopter.
6