I love Star Trek, and so do countless people around the world, it’s been a part of our lives for 50 years and it’s found its way into almost every aspect of our culture. Who doesn’t want a world with transporters, warp drives, and world peace, and let’s not forget the holodecks and replicators. Gene Roddenberry would be proud of the fact that his ideas continue to influence people today. And I think he would love the fact that Air Hogs is celebrating his legacy with a 50th anniversary edition radio controlled USS Enterprise.

The release of this aircraft also coincides with the release of “Star Trek Beyond” the third installment in the latest Star Trek movie franchise. There is also a new Star Trek TV series in production right now. CBS is building sets at the Pinewood Toronto studios, and the series will premier in January of 2017. The first episode will be aired on TV and the rest of the show will be available online through CBS All Access.   Little is known about the plot and characters however it is known that it will tie into the TV series, not the new movie franchise. The people involved are the same story tellers who gave us voyager and deep space nine so I’m expecting story arcs and digitally augmented aliens to abound.

Now let’s not forget that more than one ship has proudly carried the name Enterprise. Since the 1700s there’ve been more then 20 real life vessels with the name Enterprise, including the world’s first nuclear submarine, featured in the movie “Star Trek the Voyage Home”. There have also been at least 8 versions of the USS Enterprise created for Star Trek movies and TV shows. Air Hogs decided to use the NCC 1701-A. This is the version that you first see at the end of “The Voyage Home” and you last see at the end of “The Undiscovered Country”. Growing up as a child in the 80s it’s the version I am the most familiar with, other then the version from The Next Generation.

The most unique thing about this aircraft is the fact that it’s a flying USS Enterprise, I mean come on that’s just freaking awesome. It also comes with 10 sound effects from the original series including phasers, transporters, the warp drive, and my personal favorite, the distress alarm. Air Hogs programmed the aircraft to sound the alarm when it bumps into something hard enough, and it’s one of my favorite features. It truly made me smile the first time I bumped into a wall and that familiar alarm went off. It was unexpected and totally awesome. There’s a button on the transmitter that cycles through eight of the sound effects and another button for the ward drive.

Building an RC USS Enterprise is not an easy task and there are a few ways you can do it. A few people have built airplanes that looked like versions of the Enterprise but they required a lot of space to fly and wear all pretty big. The other way to pull it off is to turn a quad rotor into an Enterprise, and that is what Air Hogs has decided to do. Basically the saucer section is a hollow cage with a quad rotor on the inside. The main body and warp engines are made of light weight foam, and the saucer section is made of plastic. The foam components hang off the back of the aircraft and the battery is all the way at the front to balance it out. The whole aircraft balances on a point below the main bridge.

It comes with a really nice plastic stand that functions as a launching platform. Because it’s a quad rotor and it has a gyro it needs to be on a level surface when you turn it on. But because it’s a spaceship with no landing gear you need the display stand to make sure it sits level. It’s a nice display stand with a Star Trek logo on the base and it makes the aircraft look like it’s floating when it’s on the stand.

The overall detail is really high, with all the logos, lines, and windows we’re all familiar with, and the glowing deflector engine and warp nacelles look nice during the day or night. The saucer section looks pretty good considering they had to make it a hollow cage so that air could pass through. And when it’s flying around the house it really looks like the Enterprise was miniaturized by some crazy anomaly and transported into your living room. It’s a blast to fly indoors and outside, and it’s very durable, it can survive countless crashes and even being handled by small children.

The display stand comes in 3 pieces that snap together and the transmitter requires 4 AA batteries. It comes with a standard USB cable to recharge the aircraft, and this is a big improvement over most Air Hogs aircraft because they usually use proprietary charging cables and connectors.

This aircraft is designed to be very easy for anyone to fly, if you’re a beginner or expert you’ll have a lot fun with it. It’s a slow moving stable aircraft that moves a lot like the Enterprise did in the TV show. It makes stately turns and keeps itself very stable and composed. You can fly it in a small room or outdoors in a large area.

It won’t fight very much wind but it’s a lot of fun to fly outside at night because it looks so cool with all the lights highlighting its beautiful shape.

The warp feature is designed to speed up the aircraft for a few seconds in whatever direction you’re flying and it makes a big difference outdoors. It also makes the aircraft look really fast when it leans the engines forward and rockets off.

It has trims for the yaw, pitch, and roll, which is very nice, advanced, and unusual for an Air Hogs quad rotor.

It’s a very heavy aircraft so when you’re flying it around you can feel the weight of it affecting the flight. All the plastic in the saucer section and the foam body and nacelles are a lot of weight to carry, but it does fly rather nicely and it has enough power to stay airborne for a little over 5 minutes.

This aircraft is designed for kids of all ages but mainly for collectors who want a functional display piece. A lot of people have model Enterprises sitting in there homes, know you can have one that actually flies.

The provided 2.4 GHz transmitter is very well put together, with nice action in the sticks and a nice Star Trek finish. The 2 trigger switches for controlling the sound effects and ward engine are well placed and comfortable, and I really like that it has an on off button for the sound effects.

There is no auto hover, GPS, flight planning or telemetry but it does have a low voltage flashing light alarm and an impact alarm, it can also sense if the rotors are blocked by something and stop sending them power to protect the aircraft.

Everything is very easy to use and a lot of fun to play with, the sound effects are loud enough to be heard over the sound of the aircraft, and the flight experience is a good one.

The motors are cleverly mounted sideways to keep the profile low enough to fit inside the saucer section and each propeller is a very strong 3 and ¼ inch prop that you’re going to have a hard time breaking. 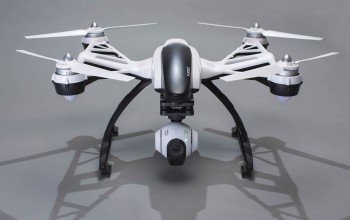 Introduction Yuneec came out of the blue to a lot of people when they released their Q500 (or Typhoon) series in 2014. In fact the Yuneec Electric Aviation comp...

I absolutely love this aircraft, it’s a great example of technological advancements, and it’s a lot of fun to fly. If you so desired you could probably spend a few hundred bucks and a lot of time upgrading it to a brushless aircraft but honestly, as is, I really enjoy it and am proud to have it in my collection. I think any Star Trek fan would be proud to own one as well.
8