The Air Hogs Millennium Falcon is intended for all ages, and is the perfect training quadcopter for your kids, as well as the realization of your childhood dreams that you can take to work. I’ve let a 3-year-old girl and an eleven-year-old boy fly it and they both had no trouble flying it, and had no problems with crashing. I also let a few thirty-something adults fly it and they also had no trouble flying or crashing it. It’s almost completely crash-proof and insanely stable.

The immediate predecessor of the Millennium Falcon was the Helix-X-4, which was Air Hogs’ first foray into quad rotors. It was truly an amazing aircraft. The decision to make it a ducted fan aircraft instead of a traditional quad with large open rotors was a great choice. It made the quad very crash-resistant and also gave it a unique look and flight style that no other aircraft could match. It was a great indoor aircraft and it did some nice stunts, but it wasn’t very good when used outside in the wind.

The ducted fans protect the rotors and motors from damage during crashes, so it is almost impossible to break a fan blade thanks to the design of the ducts. The durable dense foam body is also as solid as a hard plastic shell would be, but much lighter. The aircraft also makes a few Millennium Falcon sound effects from the movies, including a hyperdrive sound when you use the hyperdrive button, as well as a crashing sound when you crash hard. You can also turn the sound effects on and off if they get too annoying.

There’s no onboard camera, but I have seen videos in which people attached small FPV cameras to their Falcons; it reduced flight times, but it could carry the weight.

The quad has a listed range of 200 feet, but because it is designed for indoor use, you will rarely ever be that far away. If you take it outside and fly above 30 feet, the wind will usually carry the aircraft away faster than it can fly.

The Millennium Falcon was originally inspired by a hamburger with an olive in it, but it’s grown beyond that greasy lunch to something ingrained in our cultural imagination. The distinctive shape is something to behold as it flies around your house; it looks like a real spaceship flying around, as opposed to an R/C aircraft. The amount of detail in the body, as well as the paint job, is above and beyond what I expected from a molded foam body. The molded foam Falcon actually looked so good by itself that Disney decided to sell it as a display model without any holes cut out and without any R/C components. I saw one for $15 at the local dollar store and was surprised that it was the exact same mold as the R/C version. Because of the way it looks and the way it flies, I find it more enjoyable to fly than a traditional quad rotor, and it also boasts much better performance. It also has a high-quality multi-tone latex paint job that is reasonably accurate to the film version, given the size.

The dense highly durable crash- and crack-resistant foam body is far stronger than I can describe here; you would need to hold it in your hands to understand how sturdy it really is. The internal structure that holds the motors, battery, and electronics in place is made from hard plastic. The ducted fans and fan holders are also made from hard plastic. The paint is a thick latex paint that is very nicely bonded to the foam.

This is by far one of the most durable R/C aircraft on the market. You can let your kids and friends fly it around without worrying about them breaking it; unless they fly it under water, it’s going to be hard to damage. You can also crash it all day long without worrying about breaking it, but if you crash really hard on concrete, you might scratch the paint job. The battery is also designed for long-term use. It is not replaceable, but Air Hogs puts a lot of work into their battery and charging systems. The charger is a slower charger to extend battery life and the built-in battery protection circuitry will prevent over-discharging. The transmitter is solid and kid-friendly, but the battery charging cable compartment lid is easy to pull off, if you aren’t careful. Fortunately, it’s easy to snap back on when it does pop off.

Un-boxing was quick and easy. The package is designed to be collector-friendly, meaning that you can easily remove the aircraft and transmitter without damaging or tearing any of the packaging. The box has a nice display window to show off the Falcon, while the transmitter and USB charging cable are stored under a piece of folded cardboard next to the Falcon. The lid opens and closes more like a case than a box, and the graphics are nicely arranged to make it look very appealing on store shelves. I was impressed with the amount of care that went into the packaging design.

The only tool you will need is a small screwdriver to open the battery compartment on the transmitter; the 2 screws are Phillips and flat-head compatible, so you should have no trouble finding a screwdriver to fit

The Millennium Falcon is ready to fly out of the box The only thing NOT included in the package are 6 AA batteries for the transmitter. Everything else you need to start doing your own Kessel run in less than 12 parsecs is included.

Side note: I know that parsecs are a measure of distance, and not time, but if you think about it, a fast enough ship might be able to travel greater distances without refueling, and going out of your way for a fuel stop because you have a slow ship can add extra parsecs to your journey. Therefore, Han Solo’s statement about how fast his ship is on the Kessel run in relationship to parsecs could very well be an accurate description of speed, if he can skip stops that slower ships have to make, but I digress…

It took about 2 minutes to install the 6 AA batteries and about 40 minutes to charge the aircraft battery. Otherwise, everything else was RTF (ready to fly).

There is no USB port for reprogramming the onboard computer and no real way to tune the flight controls; the transmitter doesn’t even have any trims. I guess that is a testament to the accuracy of the onboard accelerometer and gyro, and I have certainly had no complaints.

I found the manual to be very simple. It didn’t include much information beyond how to charge the aircraft battery and what each of the buttons do. It gave a few flight tips for first-time pilots, but no information about the motors or battery specs. However, a complex user manual isn’t necessary, as it’s a very straightforward aircraft that anyone can figure out rather quickly.

My first impression was extreme stability, as it has no trouble lifting off the ground in a tight space, and it’s very easy to control. It’s designed and programmed for indoor flight, so it’s very precise and easy to control. I was flying around in very tight spaces and making turns and moves that I usually wouldn’t even attempt indoors, simply because the aircraft is so well protected. The enclosed fans mean that you can bounce off walls without stopping and get closer to things than you could with an aircraft that has exposed rotors.

There is no tuning needed at all. Just set it on a flat surface when you start it up so that the gyro and accelerometer can calibrate; it doesn’t even have any trims, so just turn it on and fly.

The Falcon can fly outside, but only on days with zero wind – and I mean no wind at all. Even the slightest breeze will push the aircraft faster than it can fly. Flying low to the ground is okay, but if you get too far up, it can easily get swept away. If you buy one of these for your children, try to keep it inside, unless you want to end up climbing a tree to retrieve it.

Indoors, flying the Falcon is a whole different experience. This aircraft was designed to fly around tight spaces and obstacles without any problems, so if you want an aircraft that is perfect for flying around a cubicle or something that can fly around all your kids’ toys, then the Millennium Falcon is precisely the aircraft for you. It’s very easy to accurately navigate, and it’s also a perfect training aircraft for new pilots.

There is only one flight mode available on the Falcon, which is low-speed indoor flight, but you can get a quick burst of speed by using the hyperdrive button.

Although this aircraft is designed for younger users, it is perfect for people of all ages who want to experience the joy of flight in their homes. If you’re a Star Wars fan and you’ve always wanted your own Millennium Falcon, but have no flight experience, then it’s perfect for you. Truly, anyone can learn to fly it. If you’re an experienced pilot, you will still have plenty of fun flying this aircraft around your home; it’s a surreal and unforgettable experience in many ways.

Unfortunately, the Falcon doesn’t have any pre-programmed stunts. The Air Hogs Helix-X-4 did 3 unique stunts; a flip, a roll, and a half-flip with a roll. I was totally expecting the same bag of stunts with the Falcon, but alas, it only has the hyperdrive button and the sound effects feature.

Although it has a listed range of 200 feet, I never flew it that far away. The Falcon is only about nine and a half inches long and seven inches wide, so it would be hard to see which way it’s facing at that distance. I never had any range issues or interference, either inside or outdoors.

There is no auto-navigation, waypoint function, headless mode, or return home feature.

Although there is no telemetry or FPV on-screen display, the aircraft will send a signal to the transmitter if it crashes, causing the transmitter to make a crashing sound.

This is an extremely easy-to-use aircraft during flight; just sit back, relax and fly. It’s very forgiving for new pilots and it’s maneuverable enough for pros to enjoy the experience and hone their skills. 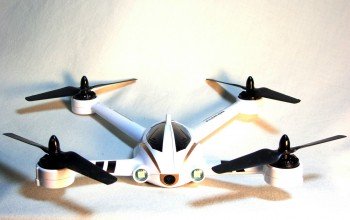 The X-252 Shuttle is meant for people who love a good adrenalin rush, and it’s definitely not for the timid. 3D stunt flying is akin to riding a motorcycle, but...

If you have the means, I highly recommend picking one up. They sell for $88-$99 at your local Wal-Mart or Toys-R-Us. I still remember when I was a kid watching Star Wars in my jammies. I wanted to be just like Han Solo – shoot first, jump in the Millennium Falcon, and save the galaxy. Alas, technology just wasn’t there yet. If I wanted my Millennium Falcon toys to fly, I had to throw it off the roof, and it usually didn’t survive the fall. Now, my dream of flying the Falcon has finally come true. I’ve flown a lot of aircraft over the last ten years, so I have a pretty large collection to choose from, but I find myself coming back to the Millennium Falcon time and time again. There’s just something about how it flies, combined with the way it looks, that is undeniably mesmerizing. The Millennium Falcon has entered the public consciousness as a vehicle for rebels, scoundrels, and nerf-herders, but there’s nothing wrong with that! Now, you and your kids can play the role of that nerf-herding scoundrel with the Air Hogs Millennium Falcon.
8