2015 has been an amazing year for drone enthusiasts.  We saw the launch of DJI’s Phantom 3.  FPV racing has taken off as a serious sport.  And 3D Robotics released Solo, what it calls “the smart drone”.  While the launch of Solo came with a great deal of fanfare, it also came with controversy.  The drone, which was released in June, was hard to find in stock at stores and the gimbal, which was promised months before, didn’t become available to most people until September.

Solo is not the first drone that 3DR has produced.  They have several drones and fixed wing UAVs that are designed for mapping.  They released the IRIS in 2013 and were early leaders in autonomous flight with their popular Pixhawk flight controller. This article focuses on the Solo and is written to help you decide if the Solo is the right drone and camera platform for you.

So let’s start with what Solo is designed to do and who the ideal owner is.  Solo is a prosumer drone that hits that sweet spot between the high-end DSLR carrying drones (think DJI S1000) and the cheap toys that carry even cheaper cameras.  Solo’s closest competitor is the DJI Phantom 3, which is also is designed for video hobbyists as well as producers who are looking for an economical way to get great aerial video without spending a fortune.  The biggest difference between the Solo and the P3 is the camera.  If you are a fan of the GoPro Hero 4, then Solo might be the drone for you.  In fact, it is the promised integration with the GoPro Hero 4 that makes Solo unique.  DJI chose to build in their own 4K camera into the Phantom 3.  3DR on the other hand, has promised to make Solo a tightly integrated aerial platform for the GoPro Hero 4.  And let’s face it, with the GoPro’s current ability to shoot at high frame rates (120 fps at 1080p) and shoot in 4K, it can take some beautiful footage under the right circumstances.  If you are a film maker or video enthusiast who likes the way that GoPro footage looks, Solo was designed with you in mind.

Now I have to admit, this spring I was very close to buying a Phantom 3.  The thing that swayed me to get the Solo was the “smart shots”.  3DR has put a major emphasis on its software and specifically its Solo App.  They have built in a variety of really cool preprogrammed shots that you can do with the touch of a few buttons on the control.  “Cable Cam” allows you to lock 2 points in the air and move smoothly between them automatically.  “Orbit” keeps the camera focused on the subject as Solo flies a perfect circle around it.  “Selfie” gives you that epic “pull away” shot as the camera moves away from you automatically while keeping you in the center of the shot.  And “Follow” does just what it says – automatically follows your position keeping the camera focused on you in a boat, car, bike, or just walking.

These built in shots are a big part of what makes Solo unique and interesting.  I have tried them all and they work well.  However, there are some “quirks” about the way some of them work.  For example, the “Orbit” shot has to be a minimum distance from you to work.  It won’t do a tight circle around you.  I strongly recommend going into a big field and practicing all of these before you try to use them for a video project.  That will ensure that you know how they work and get the best results when it counts.

Solo is a beautiful bird.  Its black finish is a sharp contrast to the Phantom’s white.  It has very clean and sleek lines.  And everything, from the white LEDs on the battery to indicate the charge level, to the green accent on gimbal, looks as though they were designed for style.  It is also surprisingly heavy for its size at 3.3 lbs (1.5kg) without the GoPro and gimbal and 3.9 lbs (1.8kg) with.  While some may take this as a bad thing, I believe that the weight indicates a lot of technology packed into a compact package.

The motors seem strong enough to handle the weight and it is a good flyer in the wind.  After 5 months and probably 50 flights, mine is holding up very well.  It has landed rough several times and even flipped upside down during one windy landing with no noticeable damage.  The only complaint that I have about the build is the landing gear.  I used to own a Phantom 2 and would often “catch” it by its landing skids.  When I have done this with the Solo, I often feel like the landing gear is bending and that the plastic could break.  But other than that, the Solo is very solid and well built.

Solo requires minimal assembly out of the box.  The most time consuming part of assembling Solo is updating the software.  I highly recommend that you download the app and watch all the “getting started” videos before you even open the box.  Solo does come with a paper “quick start” guide, which is simple to follow, but honestly, if you watch the videos in the app, you don’t even really need the paper guide.  The videos are very well produced and are a valuable resource for getting your new drone ready for its first flight.  3DR has done a great job in making the app user friendly.  Both Solo and its remote have a built in computer.  With wireless connectivity between your phone or tablet and your Solo, updating software is a breeze.  Not having to plug anything in via USB is a huge plus and the app walks you through each update step by step.

Once it’s assembled and ready to go, Solo is a good flyer.  It has an automatic take off feature that gets it off the ground and hovering in the air for you.  If you are an experienced pilot, you may not need or even want this feature.  However, most incidents with new pilots happen during takeoff and landing, so this feature is great to have as an option. Because of its weight, Solo is not particularly agile in the air, but it’s not sluggish either.  It has a cool feature that gives you control of how fast Solo flies via a slider level in the app.  Rabbit = Faster, Turtle = Slower.  To me it flies a lot like the DJI Phantom, so if you have experience with a Phantom then you have a good idea of what it’s like to fly the Solo.  One thing I have noticed is that because it has a compact form factor and a lot of weight packed into a small frame, Solo actually handles wind really well.

Because Solo and its remote control both have built in computers, you can view data directly on the screen built into the remote.  This screen gives you telemetry data such as altitude, distance, speed, battery life and more – directly on the remote.  This means that even without the app on a tablet or phone, you are getting real time, crucial data directly from your bird to the screen on your remote.  When you add the tablet or phone, which conveniently snap in to a holder on the remote, you can get all kinds of data!  The app allows you to see exactly where Solo is on a map at all times.  It gives you readings from your GoPro…things like battery life, resolution setting, frames per second…however as of this writing you can’t control any of those GoPro settings with the app, you can only start and stop the GoPro recordings.  This is a disappointing reality because I (and the rest of the world) was under the impression that you would be able to completely control and adjust the GoPro “on the fly”  But as of today, you can’t do anything more than start and stop the video.  I actually submitted a trouble ticket to 3D Robotics about this issue and was informed that “deeper integration with the GoPro is still under development”.  So I guess we’ll have to wait and see.

With regard to the gimbal, I just received and installed mine 4 weeks ago, so my experience is limited to about 15 flights I have done so far.  First off, the gimbal has to be installed, which is not difficult, but can go awry if you don’t follow the directions exactly.  On my first flight, my gimbal kept going limp.  After a quick Google search, I found that this is not uncommon.  The problem in that situation is that the HDMI cable is touching a servo or some other electronics inside Solo’s belly.  It is an easy fix…just open it back up and ensure the cable is along the specified path and not touching anything that it shouldn’t be.  Again, 3DR has some great instructional videos that explain how to install the gimbal and I strongly recommend watching them before you start.  In terms of performance, the gimbal is average.  I have noticed some jitters in my video, but only minor.  I would say that the Solo gimbal is close in performance to, but not quite as smooth as the DJI Zenmuse gimbal that I had on my Phantom 2.

The Solo gimbal works with the Hero 4 black/silver as well as the Hero 3+ black.  If you are using a Hero 4 black, it does not need any weights to balance it.  If you are using any other camera, it comes with some weights that compensate for the difference.  Once it’s installed, putting the camera in and out of the gimbal is easy.  It slips into the multi-pin port and is held in place by a green plastic tab.  The camera sits very close to the ground when it’s in the gimbal, so ideally you want to take off and land on a flat surface.  One really cool feature of the gimbal is the lever in the remote that you can push and pull with your left finger.  This lever controls the tilt of the gimbal, from forward facing to straight down.  The lever is very smooth to operate and gives you very smooth tilts with the camera.  You can even program how long it takes the camera to tilt from one position to the next.  This gives you the ability to do very slow, smooth tilts or quick “snap” tilts. 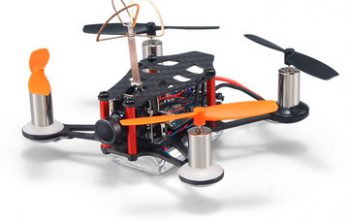 We all knew it was coming…a Nano racer from JJRPO. JJRC branched into JJPRO recently and started making racers. They made a few brushless racers that got mixed ...

Summing up, Solo has the potential to be a game changer in the prosumer aerial video space. It is well thought out, well built, and has a ton of cool features. The challenges lie in delivering on the vision. Right now, the gimbal is not easy to find and does not integrate fully with the GoPro as promised by 3DR.

This is a challenge. I personally believe that competition in the drone space is driving innovation and that Solo is a direct result. If you are looking for an aerial camera platform with a lot of cool built-in features, Solo is a great choice. Just understand that with innovation comes some complexity…installing the gimbal…learning the smart shots…keeping the software up to date. But if you are willing to invest the time to learn, Solo has a strong foundation upon which a great product is being built.