Yesterday we published an article about how Walt Disney World is using drones as “digital fireworks” in the sky. Today we have a great follow up to that article with this news about Intel using 500 drones, piloted by one person, to break a world record and prove that drones can make a beautiful spectacle in the air. Intel announced their second branded drone, the Intel Shooting Star, by demonstrating with 500 of them in the air at once. This also broke a world record.

The Intel Shooting Star is a very light weight drone for its size and include a bright LED that can be programed to change to any color needed for the show. Software helps to model and coordinate the drones flight paths and lighting patterns. To read more and see a behind the scenes video of this process, check out the article below.

Drones to Replace Fireworks at Disney 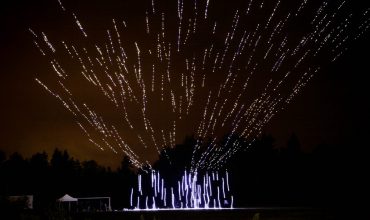