Zero Zero Robotics has been secretly developing its Hover Drone – a small (the size of a book) camera drone that can follow and take pictures/video of subjects on the move. The drone is made from carbon fiber that can be folded into a small form factor for transportation and is designed in such a way that the propellers are enclosed. This is primarily for safetly and because it is designed to be used indoors. Zero Zero Robotics has jumped on the bandwagon of other drone startups that have received funding recently. Zero Zero Robotics’ funding is $25 million.

The drone is powered by Qualcomm’s QCOM Snapdragon 2.3 Ghz Quad-Core processor. It uses sonar and a barometer and has facial and body recognition. It runs 4K video encoding while at the same time electronically stabilizing the video to prevent shaking that comes with a hovering video camera. The Hover Drone weighs 238 grams, putting it under the limit of drones that have to be registered with the Federal Aviation Administration. 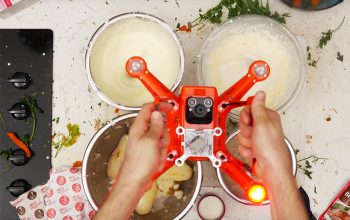